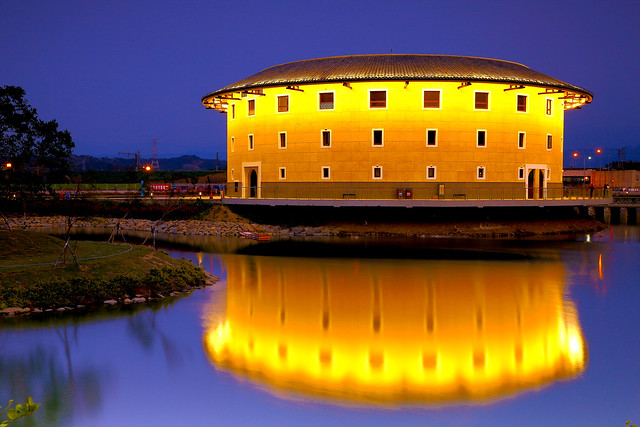 “Hakka were considered intruders who could not share in the worship of local idols. Therefore, they satisfy themselves with worshipping their ancestors within their community … they cultivate a strong in-group feeling. In preparation for a migration, each family went to its fields or burial grounds to disinter the forefathers. The bones were carefully cleaned without water and kept in a clay jar called a golden urn. These jars were carried upon the men’s backs for resettlement …”

Times have changed. The Hakka are no longer migratory people and they are free to worship any gods, spirits or idols. But a few Hakka families like mine still honour our ancestors in a way similar to that described by historians and anthropologists. Since he passed away shortly after the Japanese occupation, my great-grandfather (who was born in Guangdong Province and settled in Malaya at age 20) had been buried on a hill just outside the town of Kampar in Perak, West Malaysia.

Traditionally, the Hakka would only move an ancestor’s grave when they migrate, but in the past, people didn’t live so long. My uncles and aunts are now in their 70s and 80s and it would be a challenge if not a hazard for them to climb the hill to pay their respects to my great-grandfather. It was thus decided that we should exhume his remains and house his ashes in a wheelchair-friendly, mosquito-free columbarium with slip-proof floors.

After much consultation with the Fengshui master, the 10th of June was found to be an auspicious date for the resettlement. I departed for JB on the 9th of June. We assembled at my 4th uncle’s home at Century Garden, hopped onto my JB uncle’s SUV and headed straight for Ipoh. With our own vehicle, we were free to stop for lunch and toilet breaks. After a few wrong turns in the utterly confusing KL traffic, we were back on track and arrived in Kampar in the early evening. 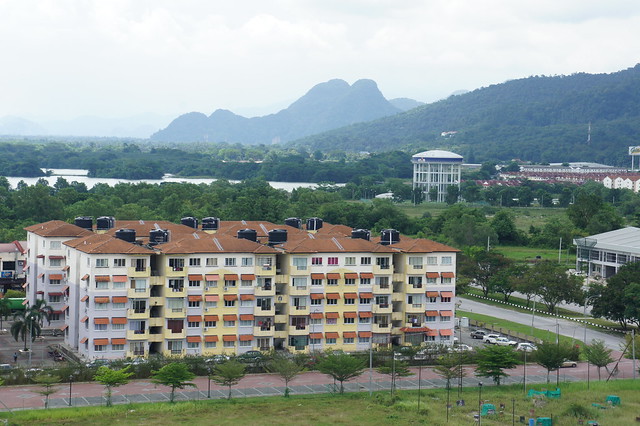 I last came to Kampar in 1989 just a year after I graduated in 1988. This is my father’s hometown before he came to Singapore. I had visited my great-grandfather’s resting place on one of my visits to Kampar. I remember the steep climb up the graveyard and the quaint old town beneath it. The latter still looked familiar, but the new town was an eye-opener. The rapid growth and transformation of Kampar can be attributed to the establishment of Tunku Abdul Rahman University which proudly adopts English as the medium of instruction and examination. Many forward-looking parents have sent their children here for their tertiary education. Thus, the demand for housing and related amenities rose rapidly in this once sleepy town.

Once a tin-mining enclave, the decline of the industry has left Kampar with a beautiful legacy – artificial lakes formed from bucket wheel dredge mining. Islets covered with trees and bushes dot the surface of the odourous water, teeming with fish and imaginary monsters. Birds glide freely through the space between the clouds and the water. On the shore, the energetic students ride their bicycles on the paths encircling the lakes while the more sedentary cast their hooks, light their cigarettes and wait for a catch. 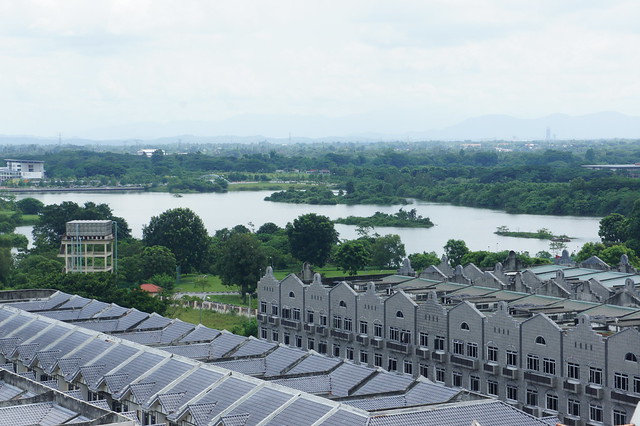 We met up with the other families and checked into 3 family rooms and 1 double room at the Grand Kampar Hotel. The room which I shared with my 6th uncle who organised the whole event, went for only about S$36 a night and it was a 3-star hotel. Anyway, we first gathered for a simple reunion dinner at a restaurant in the older part of town called 家好月圆. There are VIP rooms upstairs but it’s really a family place with no empty table available after 7.00pm. In terms of food, there is nothing really outstanding here. My favourite dish has to be the chicken. 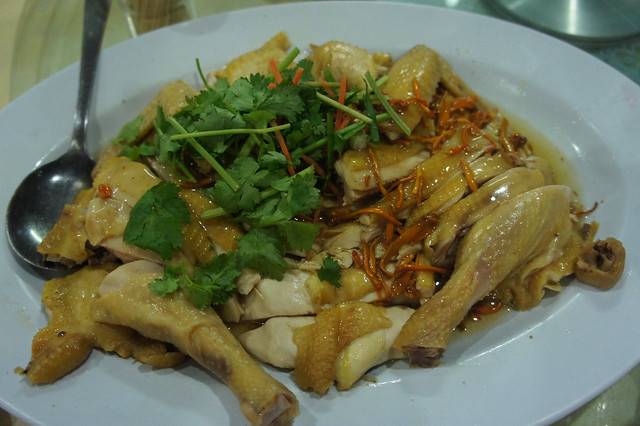 This tender and juicy meat would be enough to make “white” chicken a lot more popular than roast chicken at our chicken rice stalls. By 9.00pm, Kampar old town was already in sleep mode. We headed back to the hotel for an early night. 6th uncle had an appointment with the grave diggers at 6.30am.

We got up before first light and arrived at the cemetery to find the gates locked. When we called the Fengshui master, we were told that he was not ready yet. We must have forgotten to tell him that this event was organised by Singaporeans. Anyway, we returned to the hotel for breakfast and at 7.30am, we received a call from the Fengshui master. They were ready. We drove up to the cemetery again. At the entrance was a pool for folks to release fish and turtles to gain merit.

Next to the pool was a prayer hall. We made our offerings to the guardian spirits of the hill before proceeding to climb up. There was virtually no path. We had to step on the overgrown grasses and beat our own path to my great-grandfather’s tombstone.

The Fengshui master brought 2 Indian grave diggers. I learned that this act of exhuming one’s forefather is called “picking gold”. At my great grandfather’s tombstone, my father and my uncles made a final offering. The Indian workers began digging. The seniors went down. It was a steep, slippery and potentially dangerous descent. I placed myself as an anchor at the steepest parts of the hill and held on to everyone’s arm as he/she descended. After we had descended, I climbed up alone to watch the digging process. A rectangular hole was dug just behind the tombstone.

About 4 feet into the ground, the diggers hit some hollow air pocket. They were near the coffin lid. Further down, the soil that was dug up included dark chips that looked like charcoal. The Fengshui master said that these were the bits of the rotted coffin lid. The interior of the coffin was no longer hollow. It had obviously filled in with soil. Like a layer of black sediment around the walls of the grave, was the outline of the disintegrated coffin.

The more senior digger squatted down and started clearing the soil with a cement spade. It looked like archeology. The digger informed us that he had spotted the bones. He stopped digging. Only 80-year-old 4th Uncle and I were at the grave. The Fengshui master asked me to open an umbrella and hold it over the grave. Then, I was instructed to say: “Ah Tai, hong sin” (Great Grandpa, get up). With that, the Indian man continued to dig. Soon, a perfect skull was uncovered. This was followed by clavicles, scapulas, humerus, radius and ulna, all discernibly grey against the brown soil. The worker turned to the other end of the rectangular hole. He dug on and exposed the large leg bones.

The bones were all placed into a plastic bag, then transported to the crematorium/columbarium at Temoh. The whole place look rather Buddhist, but the apparently, the ceremonies and rituals were all conducted following Taoist customs. After some chanting by the Taoist priest, my great grandfather’s ashes were placed into a “gold urn” (actually marble). As my great grandfather’s bones were very well preserved (a good sign) and he was a tall guy, the ashes filled the large urn completely. I volunteered to carry the urn which probably weighed at least 8kg to the niche upstairs. It’s mind-boggling to think about how Hakka men of the past had to carry their forefathers remains all the way to the next county or even province for resettlement. 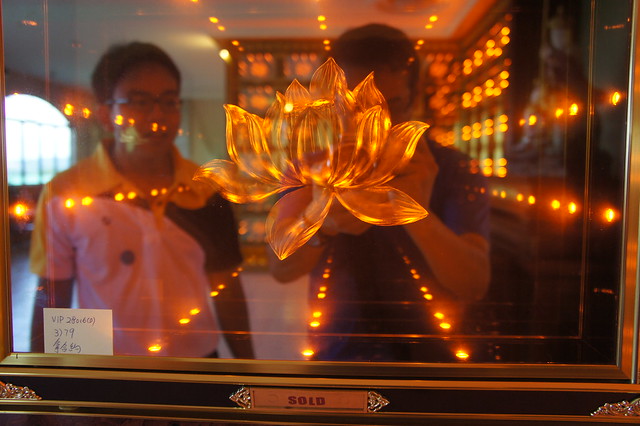 The niches at this columbarium come with different price tags. The most expensive type is what you see in the picture above. RM50,000 (also depends on position) I heard. Mission accomplished, we returned to the hotel for some well-deserved R&R. For me, I was just following tradition. As my great grandfather’s eldest great grandson, I feel a sense of duty towards this family tradition. There are Christians amongst my cousins. They too turned up. I guess that at the end of the day, this is about Hakka family tradition and not really about religion. For hundreds of years, the nomadic practices of the Hakka people had helped cultivate cohesive family units.

Nomadism and the resettlement of ancestors’ resting places have also helped many generations of Hakkas get acquainted with their forefathers and their roots.