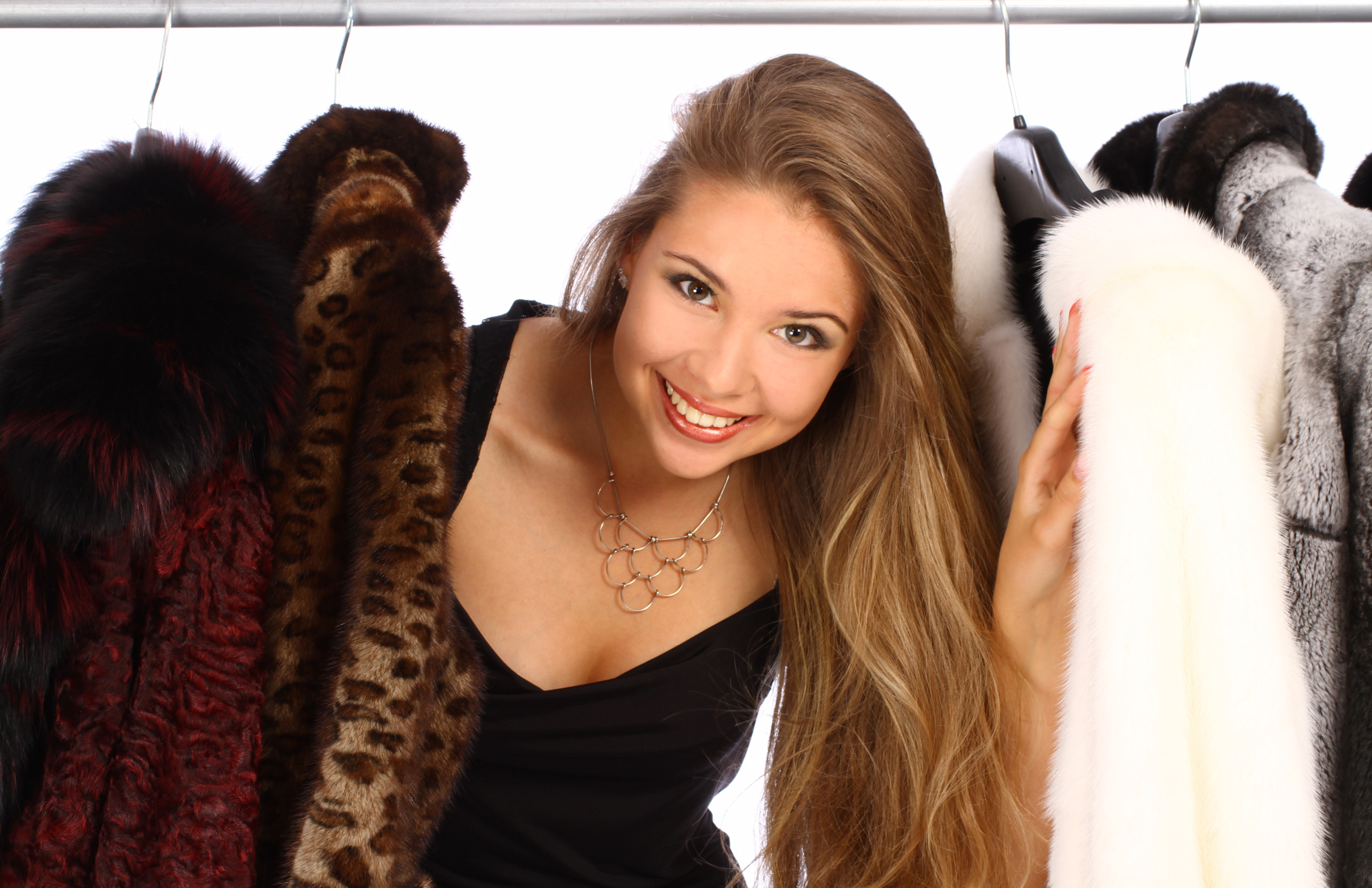 And the influential brands just love them. On second thought, that should not be too surprising since it’s far easier to get fools than thinkers to buy your things.

Just when you think that virtually famous bloggers and photographers who extort money and steal other people’s photos ought to be behaving themselves by now, another famous Instagramer is now in hot water for using fake photos to make herself look more impressive. Sadelle Yeung is a self-declared freelance “beauty and fashion model.” She has more than 92,000 Instagram followers on her personal account and has worked with a number of high-profile clients like Givenchy, Lancôme, and Estée Lauder.

Time for a background check. Of Shanghainese parentage, Sadelle Yeung 楊舒婷 was born in Hongkong in 1990 and was educated at Leung Shek Chee College 梁式芝書院. Not an outstanding student, she left school after Secondary 5. There is little information on what she did immediately after that. Her modelling career began in 2012 and with her talent and looks, she has been represented by several agencies. On social media, she successfully promoted herself as someone who enjoys life to the fullest, living in the moment. In 2015, she reached the finals of the Miss Jewellery HK Pageant, but didn’t win it. She was nicknamed Avocado Goddess 牛油果女神 by her fans because she often posted pictures of avocado dishes on Instagram, claiming to have prepared them herself. We’ll come to that in a moment.

Apparently, she gets by promoting products for cosmetics companies, so most of her YouTube videos are makeup tutorials. Even her travel vlogs (not too many of those) promotes skincare products. To complete the healthy image, she is also into fitness/slimming. There is no doubt that she is slim, but how did she get there? Well, you can get slim on the grapefruit diet or just eating instant noodles, but is it healthy for everyone? Just by being slim, she seemed to qualify as an expert on slimming in the eyes of her followers. Bizarre but absolutely “logical” in this digital age where all gadgets are getting smarter except for the human brain.

Most of her travel pictures are not on YouTube but on Instagram. Her own official account is now “sanitised”. Since I’ve never been a follower, I only checked her account before I wrote this blog entry. For those who are as unfamiliar as I am, note that some of her Instagram pictures are quite professionally taken, even though she has never introduced us to the “crew” that accompanies her on her trips. I quite like the following image which is embedded from her account, so if you don’t see it, then she must have taken it down. Her original Instagram account had a lot more pictures.

Everything comes to you in the right moment. Be patient. ⚡️ . #floraldress #springtime

Like some other virtually famous people, Ms Yeung is also into the vulgar art of plagiarism. Images stolen included travel photos and food photos. Apparently, she didn’t do much photo-editing like you know who. Check out https://www.instagram.com/copywithsadelle/ for more evidence of Ms Yeung’s artful misdemeanours. The fiasco began when netizens were discussing plagiarism among web celebrities. Not being able to generate enough content to impress their gullible fans, these folks resort to stealing images and passing them off as their own. Strangely, Sadelle Yeung didn’t seem aware that if she stole images from somewhere on the internet, she would eventually get caught. Her dishonest acts were exposed and comments started flooding into her Instagram account. The evidence went viral with a few haters even going around creating parody sites and Instagram accounts to display all the evidence they collected to shame her. 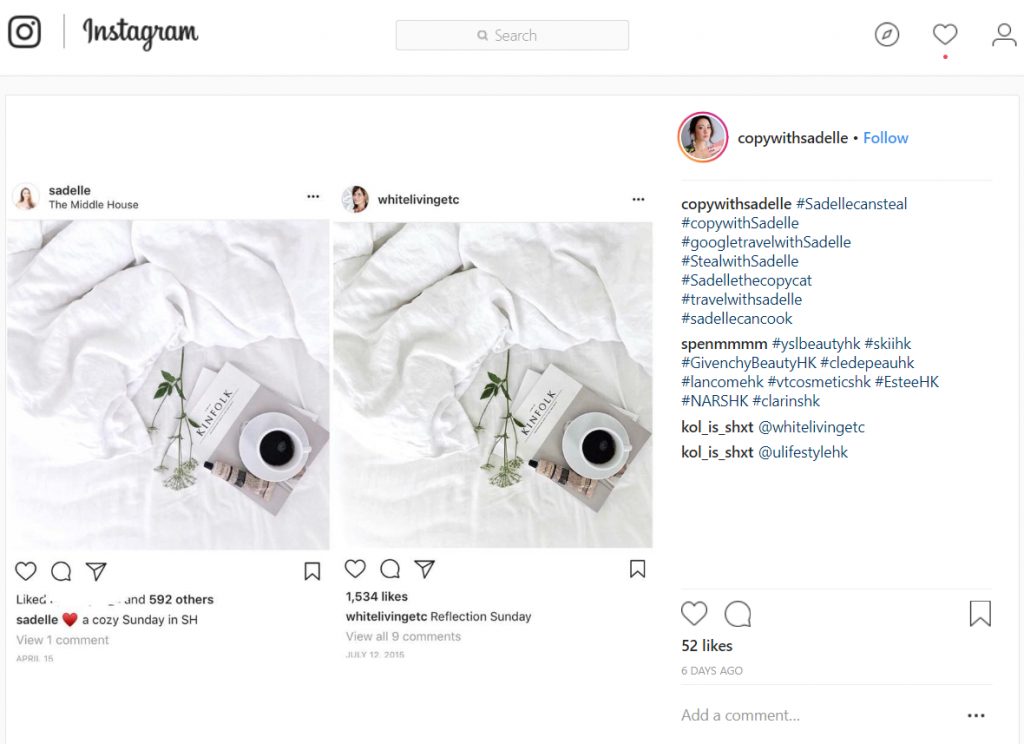 So what was Sadelle Yeung’s response to the expose? Followers probably expected an apology, but from her replies to those who vilified her, the Avocado Goddess was hardly remorseful. In one post, she implied that people who were attacking her were busybodies and proudly announced that she would keep herself fully occupied. Oh, she actually had almost 2,000 likes for that. She also assured critics that she would not delete their comments.

“The only time I need to look back and reflect in my life is to see how far I have travelled. Don’t stay in the same spot. Don’t make the same mistakes.”

“Everyone makes mistakes, and it’s not fair to focus on one mistake and blow it out of proportion. I accept everyone’s feedback good and bad.”

She then deleted 95 posts carrying stolen images (including comments). You can check out the following link.

Let us now revisit a post I made on the self-centred behaviour of people on Instagram. It’s the age of absurdity. When those of us who really know something about cooking share our posts, we hardly get any followers. When fake and stolen photos from the influencers are posted, they get numerous praises and likes from foolish and ignorant followers. Since things are so absurd and people are so foolish, why don’t we make a deal? Why don’t the companies that sponsor these “influencers” buy content from us? We collect our money, keep our mouths shut, claim no copyright, give all the limelight to the “influencers” (like ghostwriters and stuntmen) and everybody would be happy – including the deluded fools.

Whatever Ms Yeung did with those “few” food and travel photos, we have to accept the fact that she did an excellent job of promoting herself on social media. I can’t complain too much about not having as many fans as she still does (after the expose) because I just don’t have her face and body to attract so many foolish fans. Neither do I look good in a bikini. And Sadelle Yeung’s dishonesty with some images notwithstanding, I believe she didn’t use a stunt double in the following video.

The art of stealing ideas from your critics, competitors or opponents and recycle them to look like your own, is only mastered by a few politicians and virtual celebrities. Both rely on foolish followers.