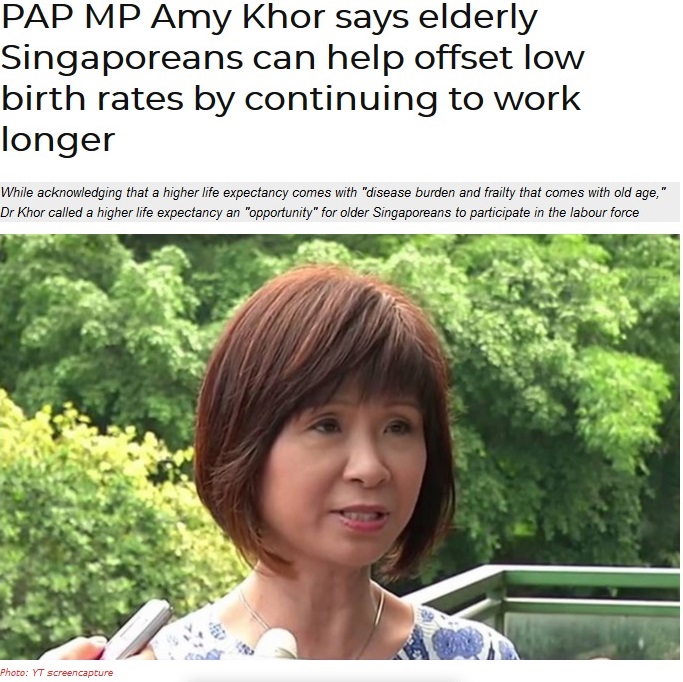 Hey folks, National Day is coming and to show our loyalty to the Part … I mean country, our seniors and those getting to be seniors need to be prepared to do something for the country, which in spite of having many billions in its reserves, is facing a crisis due to low birth rates. As these billions are meant for some “rainy day” Armageddon in the very very distant future, our older fogies have just been informed that they need to work longer. Well, how much longer? Into their 80s? 90s?

And why not? There have not been many cases of seniors being killed by work. It’s probably quite safe to be cleaning toilets and collecting utensils while others endure boring cruises and taichi in the park. The alternative could be worse. Just as we should be thankful that it’s 9% GST and not 15%, our uncles and aunties should be thankful that they’ve only been told to work instead of making babies.

Low birth rate may be a reason to open our doors to foreigners who sincerely wish to join the club. And that’s what we have done or thought we have done.

Some folks don’t seem to be able to see that for a population that has grown 85% since 1990, low birth rate seems like a lousy excuse for merging schools. Have we been importing the right kind of immigrants who produce children to fill up our classes? Or is there another possible scenario where the couple get their Singapore citizenship, give birth in the USA and thanks to the 14th Amendment, we have another student in our ever-growing Indian schools. Numbers are important, but whether they mean anything depends a lot on the story behind them.

But seriously folks, the number that we should all be worried about is not 6.9 million or 10 million, but the old-age support ratio. At first glance, the descending line in the graph below seems very worrying. Back in 1970, we had 13.5 people aged 20-64 (presumably working) supporting one retired person above age 65. In 2018, there are only 5.1 suckers left doing that. All this in spite of an 85% increase in population? Have we been importing too many seniors like Jim Rogers?

Then, this gets me scratching my head. Individuals have very different incomes and earning powers. Remember the high and low SES debate? Certainly, a minister’s salary can support more people than a taxi driver’s. Certainly， importing a billionaire or having a few pastors like Kong Hee can more than equal the 13.5 $200/month clerks we had in 1970. How reliable is this Old-Age Support Ratio?

Finally, we come to the highly probable scenario of a couple who had produced 4 children and contributed tremendously to the national fertility rate in the 1970s (and getting fined for it) now having to work into their 80s because our country now has one of the lowest fertility rate and the highest number of billionaires (mostly imported) in the world.

Below is a token of appreciation for being a contributor at a special school. It was made by children with special needs. Someone remarked that people will only buy something like this out of compassion.

True. But compassion is something that is very lacking in this society which is always punching way above its weight to be at the forefront of plenty and technology. The use of rhetoric like “abilities”, “inclusiveness” does not negate the fact that people with special needs will need some form of welfare – a dirty word in many pragmatic Singaporeans’ dictionaries. To them, anyone “unproductive” is an unnecessary burden. Policies speak louder than rallying cries. But equally absolute, is the fact that we will all grow old, sick and unable to work eventually. They may not even be able to make tote bags and bookmarks. How do they want to be treated then?