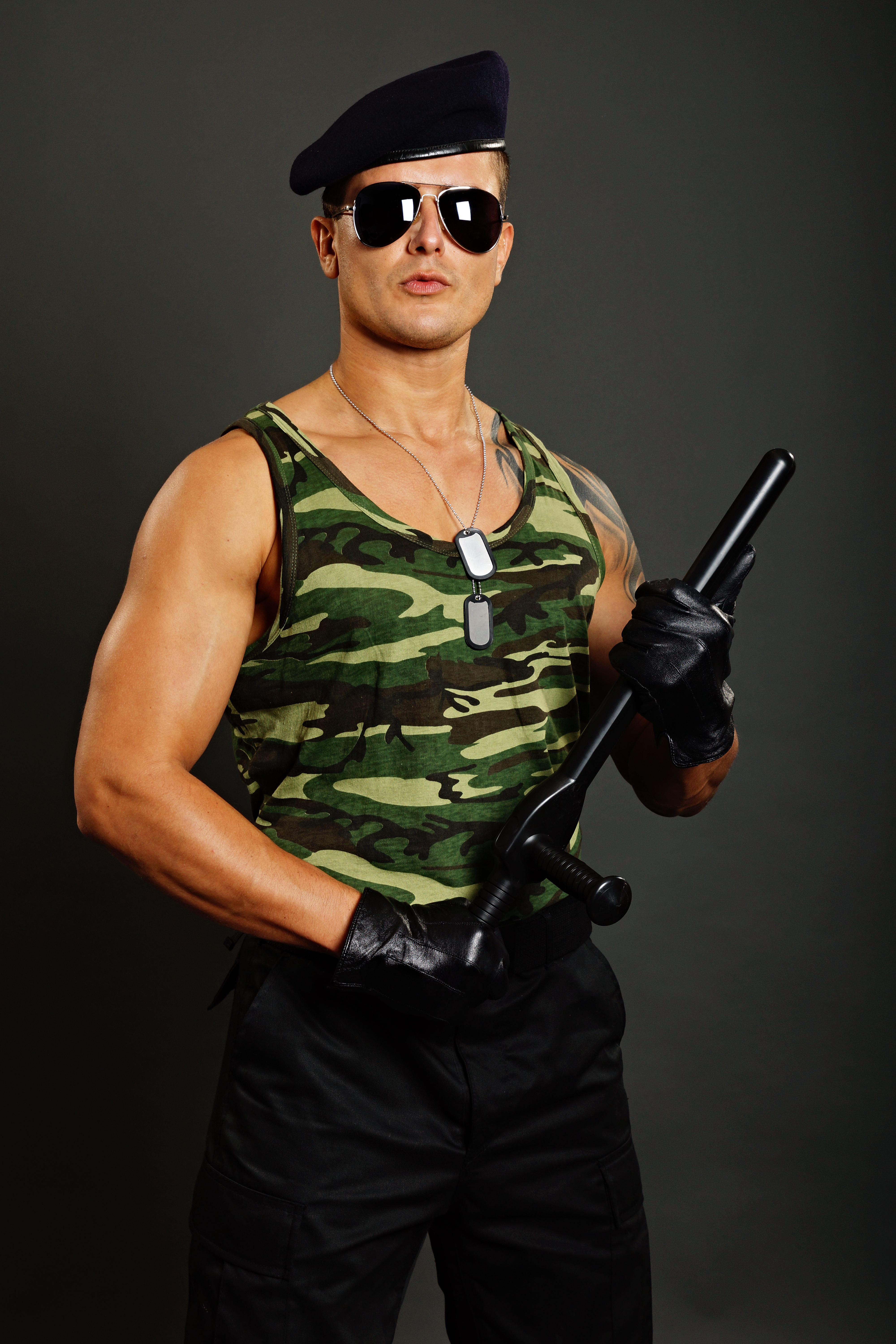 It’s confirmed. We’re going to have a Covid-19 GE2020 on 10 July 2020. No surprises there. For months even before CB, the incumbent had been extolling the benefits of holding the elections earlier rather than later. There is no escape. Things are only going to get worse going forward. You’d want to be “in position” before the second wave hits. If not now, when then? Of course, while we receive reports of Covid-19 positive cases visiting supermarkets and shopping malls every few days, we’ll only get information of Covid-19 positive cases visiting polling stations and advice on monitoring for signs and symptoms after the elections.

Introduced as a candidate who would be contesting in GE2020 under the PAP flag on 24 June 2020, Mr Ivan Lim Shaw Chuan had unceremoniously (been) dropped out of contention on 27 June 2020. It goes to show how efficient the party is at getting rid of liabilities. Most of us already know how things developed over those few days, but in case you’re reading this months after the GE, allow me to recap.

Practically on the same day after Mr Ivan Lim’s candidacy was announced, people who claimed to know him in NS/reservist alleged that he was arrogant, selfish and uncaring.

With only adjectives and no stories, the men’s claims were not convincing. Fortunately, there was someone who could tell a story. Again, there’s nothing in it that we should take too seriously. He was at most a siao on OC. He could argue that he was doing this for the good of the company. If I want to stay neutral, I would say that this won’t necessarily make him a bad leader either.

Then, came a Bryant Wong who wrote on Facebook that Ivan Lim Shaw Chuan was his Commanding Officer (CO) in his Combat Engineer Battalion. Bryant who was the former RSM, said that Ivan Lim often drove expensive cars into the army camp to show off his wealth and status. Again, that doesn’t really help to bring him down. He’s hao lian, but so what?

But then Bryant Wong recounted that during a field trip, Ivan Lim flared up against his subordinates after one of them brought low-ranking sergeants into the air-conditioned tentage he was sitting in:

“I was disgusted. His action and speech were simply that of an elitist.”

According to the former senior military specialist, Ivan Lim would brag to his soldiers how he, as the General Manager at the government-owned shipyard Keppel, would have many people reporting to him:

“There were other instances during the Battalion briefings where he would always peppered (sic) the briefings with his personal achievements (How he is a GM at a shipyard, how many people reporting to him at work etc.) He was never well liked by his soldiers and commanders of the Battalion due to his “humble brag” and driving around the camp in his expensive cars.”

OK, so far, only the part about scolding 3rd sergeants and PCs for getting into the air-con commander’s tent would nail him as uncaring and arrogant. It’s not a crime to brag and drive expensive cars. When challenged to substantiate his case, Encik Bryant Wong did not flinch. He welcomed Mr Heng Swee Kiat to clarify matters with him. Of course, the intrepid RSM was later asked to “watch 6” by a retired colonel, but that story is yet to unfold. I may come back to it later. Netizens made a police report in support of Bryant and many see him as a hero.

But the most damning testimony in this “crusade” against Ivan Lim came from post by one Kumar Kumar made in 2014.

This, I think, is what is really needed to bring Ivan Lim down. Endangering workers’ lives. Fortunately, appropriate remedial action was taken. If this had gone unheard, we may never know. Some netizens have gone as far as to petition for his removal. Look at a screenshot of the change.org campaign.

Yao mo gao chor ah? Do we need to do this? On the same day the petition was up (27 June 2020), Mr Ivan Lim announced that he would be withdrawing from GE2020. The petitioners’ wish came true. Many netizens were cheering, but I’m a little worried. Even though Ivan Lim is probably the arrogant, callous and uncaring bad egg claimed by so many people, there are only a handful of credible witnesses. Would it take a similarly insignificant number of haters to bring any potential candidate down? So far, we’re assuming that whistle-blowers have nothing to gain.

Next, I feel that Mr Ivan Lim’s accusers should have held back their attacks until after Nomination Day. Sure, riding on Tharman’s coattails may give Ivan Lim an easy ride into Parliament, but attacking him then might also bring the whole ship down. If George Yeo could lose at Aljunied without controversy, then there is at least a slim chance that Tharman’s entire team may go down with the Ivan Lim controversy. I think it’s worth the gamble, but too late now.

Fans and PLPs are going to be disappointed as Facebook has taken down the Fabrications About the PAP page, as part of its actions against accounts which violate the social media platform’s policies. Coincidentally, it’s taking place ahead of GE2020. The blatantly pro-PAP page and was run by one Mr Chua Chin Seng. Going back 3 years, the operators had been warned by police in 2017 for breaching election advertising rules during the Bukit Batok by-election. 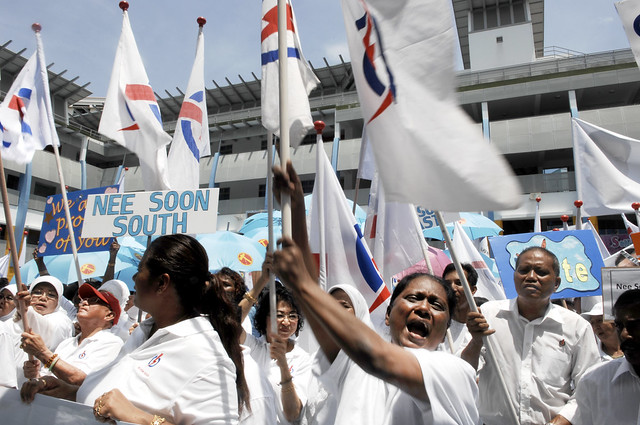 This latest action by the social media platform is said to be based on violations by these accounts and not based on the content they posted – obviously since no one can be faulted for being PLPs. The same ought to apply to criticising or supporting any party. Facebook asserts that it does not allow people to misrepresent themselves on Facebook, use fake accounts, or engage in behaviours designed to enable other violations of its Community Standards. I wonder what it is that Facebook knows about the site that we don’t.

I have no idea who Chua Chin Seng is – probably some civil servant trying to get into our leaders’ good books. Of course, he is not the only one. Some jobs are indeed easier to manage when you play the role of the PLP. Others are secured when you demonstrate exceptional talent – like the ability to quote statements that sound cheem and provoke awe from the plebeians. Allow me to quote something shockingly profound from our brilliant professors. 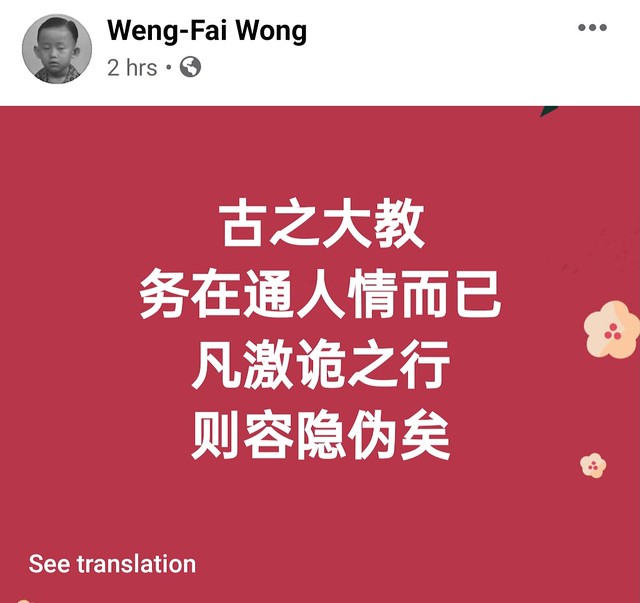 Chances are, you won’t know what the brilliant professor is talking about (that’s why we’re not earning a professor’s income), but rest assured, it’s not an original statement. I have no idea what the good professor’s intention was, but not surprisingly, he received no replies until another brilliant professor quoted the above lines within their proper context. I won’t translate. I’ll just explain – in a moment. 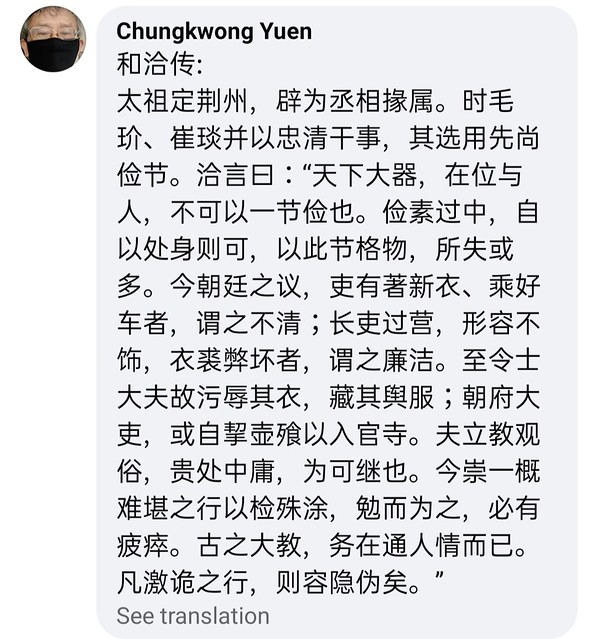 The text originated from a man by the name of He Qia. It is found in the historical annals 三国志 by 陈寿 (not the more popular, at least 50% fictional Romance of the Three Kingdoms by Luo Guan Zhong) . In this passage, He Qia 和洽 was addressing Cao Cao 曹操 and referring to two men Cui Yan 崔琰 and Mao Jie 毛玠. The professor then interpreted the passage this way, thinking that they were Cao Cao’s advisors: 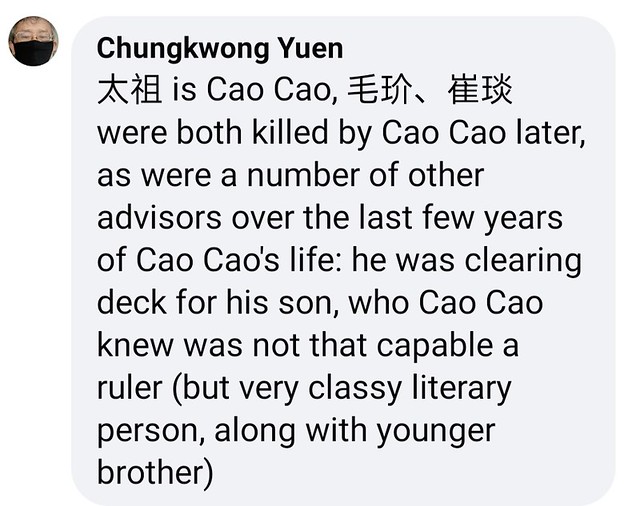 This is of course, untrue. Cui Yan and Mao Jie were two of Cao Cao’s most trusted officials. He appointed them as his chief examiners. Anyone who wished to serve Cao Cao would have to pass tests designed by the two men who were well known for their frugality and integrity. When Cao Cao was a junior officer in the imperial court, he was appalled by the corruption and bribery involved in buying official appointments. He chose these two men as examiners because he was sick of the old system and also to make sure that he was really getting the most talented men.

In the long Chinese passage, He Qia (a relatively low-ranking official) was arguing to the contrary, telling Cao Cao that frugality does not guarantee integrity or incorruptibility. One could hide one’s wealth and ambition by dressing and eating simply or travelling without a procession. If frugality and austerity were such important virtues, then, they may hide the candidates’ faults. Taken out of context, He Qia’s statement could mean that extreme wealth and extravagance in officialdom are acceptable while frugality is an easy way to hide one’s faults and weakness.

But there is no evidence that He Qia was against the two examiners. What he was probably trying to do, was to get Cao Cao to change the two men’s appointments or get them to tone down the standards for austerity they set for candidates. Once, Cui Yan had the audacity to turn down an offer by Cao Pi, Cao Cao’s successor. He Qia knew that Cui Yan and Mao Jie would end up making many enemies and true enough, they did. With a few trumped up charges from his haters, Cui Yan was imprisoned and forced to commit suicide. Mao Jie almost suffered the same fate. He passed a sarcastic remark over the injustice done to Cui Yan’s and was merely dismissed from his post after He Qia begged Cao Cao not to kill him.

Nevertheless, there is a bit of truth in Prof Yuen’s statement. Cao Cao’s main advisor Xun Yu fell out of favour because he was against Cao Cao becoming King of Wei. He was compelled to commit suicide because he did not support Cao Cao’s ambitious new plans (Xun always thought that Cao had sympathy for the powerless Emperor Han Xiandi). He did not receive the hint that he was not needed anymore because Cao Cao wanted to clear the deck for his son Cao Pi. Because Xun Yu was such an influential figure, Cao had to make sure that he couldn’t influence public opinion about his kingship. I still don’t know where Prof Wong got that statement from an obscure figure like He Qia, but our educators seem to be too preoccupied with teaching to engage in humble learning.

For more on the Three Kingdoms, do check out my Three Kingdoms series. If our country ever ends up like Eastern Han, then like what Encik Muthu said, you die, I die, everybody die.