By now, you must have been sleeping if you have not heard about the case of Parti Liyani. I’m not sure how much of it has been covered by our newsPAPers, but social media has been overflowing with vitriol. There is heavy and widespread criticism for Liew Mun Leong, forcing him to retire early, much to the consternation of “interest groups” at Changi Airport and Subana Jurong. From the very beginning, he had tried to cover his own wrongdoing by firing her and to make sure she couldn’t incriminate him, he framed her in a blatant act of 恶人先告状。

The hero in this whole saga, Mr Anil Balachandani, has also spoken about the organisation that did most of the work to help the accused, his sense of mission and above all, his client’s determination to prove her innocence.

To my mind, the most thought-provoking thing that Mr Anil mentioned, is the fact that if Parti had pleaded guilty in the first instance, she would have been sentenced to a short jail term and she could have moved on since 2 years ago instead of being held back for 4 years, to great financial and opportunity cost, fighting a case fraught with uncertainty.

Such determination seems a bit unfamiliar to me. Her sense of justice, dignity and self respect is something that most wealthier, better-educated, trouble-fearing and pragmatic Singaporeans lack.

There is always a silent majority supporting the ruling party. But when I discuss the ordeal of a wrongfully accused maid and the devious acts by her former employers to frame her with some of the folks within my social circle, there appears to be another silent majority.

Let’s not take for granted that just because there appears to be a battalion out there against the Liew family, that must be the majority view. Well, there are folks who value Mr Liew’s “contributions” so much and others who think that he ought to be given a chance to explain himself (after the high court had already passed judgement). One illustrious individual even had the cheek to say that justice has already been served (so let’s forget about what Mr Liew et al did?).

SDA’s Mr Desmond Lim had this to say:

As a working adult, I am obliged to fulfil my tasks from my paymaster and contribute to my family.

If one is not paid while serving the public, then one’s contributions to the society and the nation would be considered noble. However, since some of our civil servants are highly remunerated, the onus is on them to do their jobs and to do it well.

Their numbers may be small, but Mr Liew’s apologists are illustrious and conspicuous. And make no mistake, they are only the vocal ones. As for the silent ones, I can’t read their collective minds, but from those I know quite well, I believe they consider Parti as a person of no consequence. Right or wrong, they see it as a very bad “deal”; losing an important man like Mr Liew for the sake of awarding justice to a lowly individual. Social commentator Raj Singh posted the following on Facebook: 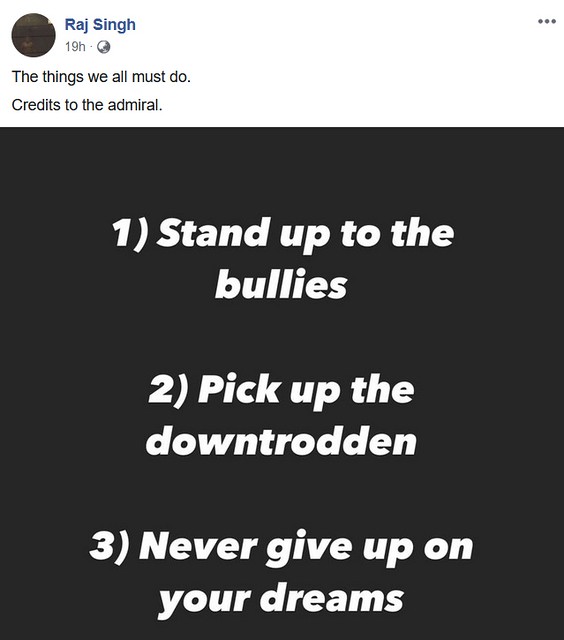 One of the reasons Singapore is so peaceful and efficient is that people submit to bullying. Why? So that certain processes are not interrupted or delayed. People vote for leaders they don’t like so that their estates can benefit from the rich party and they won’t be called free riders. Pragmatism rules and truth be told, I have myself been guilty of submitting to acts of bullying just to stay out of trouble. Consider POFMA. How many Singaporeans would have the courage and conviction to do a Parti for 4 years to fight against a minister’s unjust accusations (if any).

Parti, HOME and Mr Anil had put many of us to shame. But let’s not kid ourselves. As in Parti’s case, it takes tremendous sacrifice. To achieve those 3 ideals mentioned by Raj Singh above, we must be ready to accept that certain processes will be slower, very time-consuming and perhaps be even a little messy. Like the 4 “wasted” years that Parti went through, we must be prepared to accommodate those who rock the boat and not say “don’t sabo lah” to them.

In essence, while many vocal folks vilify Liew Mun Leong on social media, there is a silent majority that could be more worried about dishonest CEOs retiring than innocent maids getting jailed. It’s all about Peanuts For You, Truffles For Me and justice, equality, democracy and human rights as useless, troublesome things that cannot be eaten.

Some people mistake this silence for bochap. The silent majority is not bochap. They are just too ashamed to admit that they would rather have the maid losing the appeal.