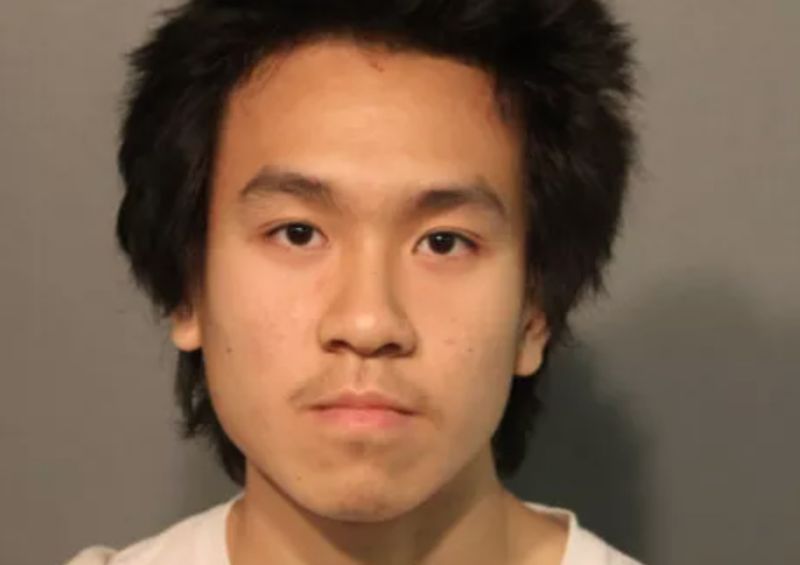 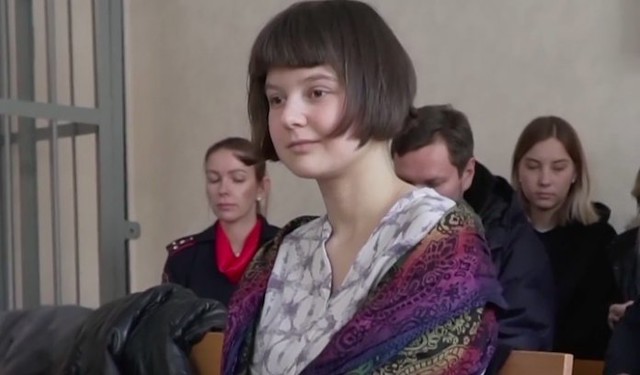 Among her many works, were drawings of naked women with slogans like “Living women have body hair”, “Living women have fat and that’s normal”. She was arrested for “distributing pornography” and placed under house arrest. Yao mo gao chor ah? It was a disgusted anti-gay campaigner who reported her to the authorities, but Tsevetkova has her supporters. Meanwhile, Miss Tsevetkova remains defiant. She is still doodling at home. Why am I talking about this Russian lady? This is just an introduction. Hold that thought for a while. I’ll come back to Tsevetkova in a moment. 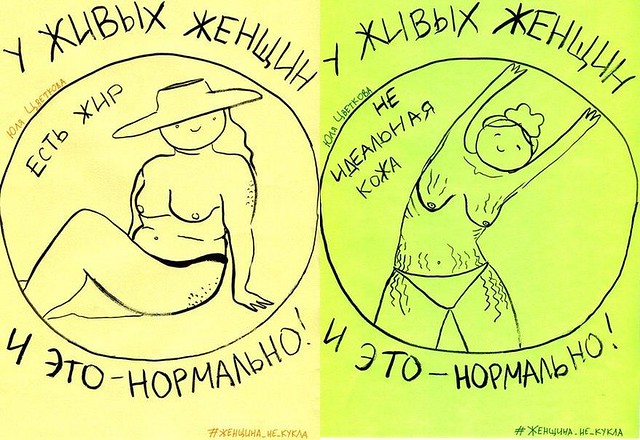 Amos Yee again? Yes, he made it into the news not just in the US where he now lives, but also in Singapore. While Amos Yee’s most vocal supporters have gone largely silent, some of his detractors in the form of PLPs and other (moronic moralists), have been childishly gloating over their frivolous “victory”.

But let’s get one thing straight. The images of the folks holding those placards supporting Amos Yee were 1) taken long before Amos Yee was found to be a paedophile. 2) unrelated to the current charges against him. In fact, the pictures were taken before Melissa Chen’s rather emotional video and my posting on his bullshit made 2 years ago.

Not everyone offended by Amos Yee was pissed off for the same reason. I saw two groups of individuals baying for Amos Yee’s blood, both equally meek and pious towards their respective “faiths”. We have the conformists who eschew any form of confrontation or “political blasphemy” while another group condemned an insult to their faith. Curiously, many of Amos’ detractors felt sore and cynical when Amos was actually accepted for political asylum in the US.

Within the camp that supported Amos Yee, I see 3 groups. The first group are disgruntled individuals who hate the government but lack the courage to give it a piece of their minds. Through Amos Yee, they were able to obtain some form of release. It’s like a boxing fan cheering his idol on. The second group are the dreamers and idealists. They are familiar with the likes of Malaysia’s Namewee and China’s Ai Wei Wei. Mr Ai is a very accomplished artist who has created many impressive, thought-provoking pieces of art. While Namewee may not be at the same level, his achievements at his age dwarf our own Jack Neo. Both were outrageously vulgar in their criticism of the authorities. Could Amos Yee mature and mellow into Singapore’s Namewee at least, if not Ai Wei Wei?

Amos Yee did show promise. He had a passion for film and surprised those who were studying film by showing that he knew more about film than they did even those he had never studied the subject. So make no mistake, we have a very talented albeit unbridled man here. We can’t blame the idealists for being hopeful.

Finally, we look at the third and most legitimate group. While a lame website like Fabrications About The PAP 2020 may try to muddy the waters by placing one corner of the puzzle next to another corner, let’s recap and stick to the facts on why Amos Yee was arrested and the reason that he received support and sympathy in the first place.

On March 27 2015, Amos Yee posted a video titled “Lee Kuan Yew is dead” on YouTube, and the next day published an image of two cartoon figures having sex, with photos of Lee, who died on March 23, and the late British Prime Minister Margaret Thatcher superimposed on their heads.

I must confess that I cringed when I saw that video, but it quickly went viral with numerous shares. Some folks found it hilarious. Some folks cheered for him, but as usual, it’s the negative reactions that yielded devastating results.

Singapore prosecutors charged Amos with violating penal code article 298 (“uttering words with deliberate intent to wound the religious or racial feelings of any person”), punishable by three years in prison and a fine, and penal code article 292(1)(a) for transmitting obscene materials, punishable by a fine. Prosecutors filed a third charge, for violating the Prevention of Harassment Act, which outlaws “use [of] any threatening, abusive or insulting words or behaviour,” but later withdrew the count.

Most people would agree that Amos Yee’s video was inappropriate, insensitive, and disrespectful. But many also felt that the punishment he received was wrong and unnecessarily harsh. After all, Amos Yee was only a teenager who happened to be offensively vocal with his opinions. It was a nonviolent offense and his videos probably only triggered anger but not clinical depression for those who had “unwittingly” watched it.

Despite his schooling age, Amos was nonetheless arrested and detained by the authorities, eventually sentenced to 6 weeks’ jail at Changi Prison. This could have made him the world’s youngest prisoner of conscience. It was based on this premise that Amos Yee received support from this third group. The fact that I don’t support what he said in the videos has nothing to do with my objection to the way he was being treated as a minor for an offence which cannot be extrapolated to paedophilia by any stretch of the imagination. Those who said “I told you so” are clearly doing a 马后炮.

Why were some people baying for his blood? It just shows our society’s lack of patience and compassion with misguided young people. It also shows a lack of wisdom to distinguish past from present. At any rate, folks who supported Amos Yee are not the only ones who got it “wrong”. 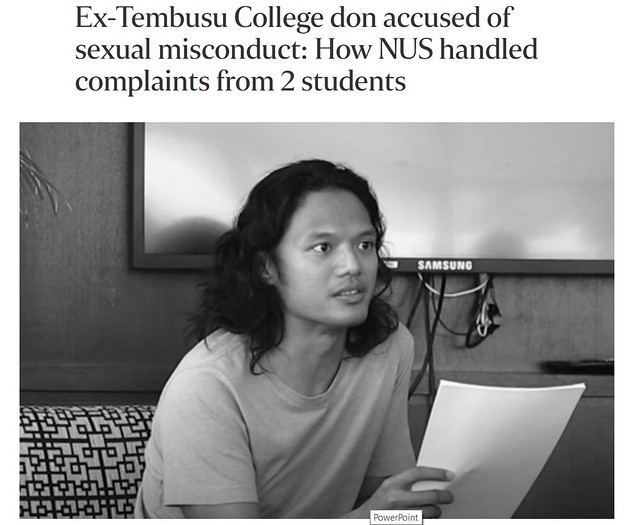 Let’s see what our professors have to say. One said that the one who accepted his application should be held responsible (yao mo gao chor ah?). The other one (Prof Wong again) who has been very supportive of the authorities’ treatment of Amos Yee, argued that the one who approved his application in 2011 is blameless. But doesn’t that extend to the supporters of Amos Yee who didn’t know that he might grow up to be a paedophile? 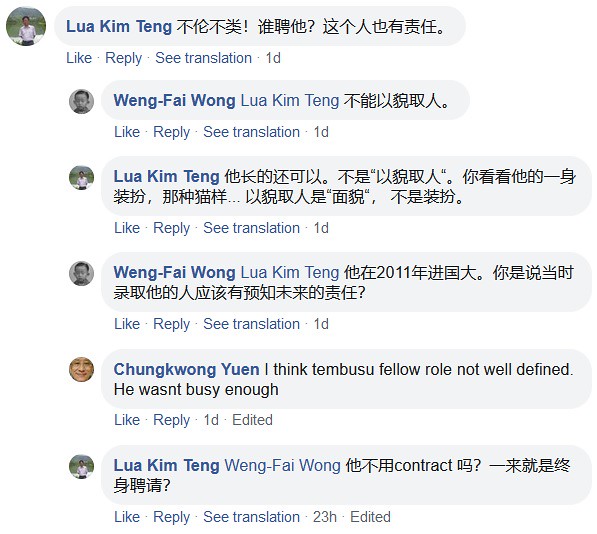 I’m not saying that these scholars ought to behave like prudes. In fact, as long as they are not harming anyone, society would be more vibrant and fertile if we grant mavericks and unorthodox characters some leeway for experimentation. Punish them if they do harm, but don’t destroy them.

By claiming victory, are the gloating pundits saying that they knew Amos Yee was a paedophile all along or are they trying to say that any 16-year-old who insults a political leader and a religious group is hopeless? In 1976, a 30-year-old American man was arrested in Canada. He pleaded guilty to drink driving. He was fined $150. So our gloating pundits see a perpetually drunk tramp in him and dismiss him as hopeless? That could have been former POTUS George W Bush.

In 1978, a 25-year-old man was caught trafficking cocaine and sentenced to 5 years in prison. Would our gloating pundits dismiss him as hopeless? That could have been Tim Allen.

What about the 20-year-old around Amos Yee’s age in the 1970s who smoked marijuana habitually and experimented with LSD? Dismiss him as junkie? That could have been the late Steve Jobs. A Black man was convicted of rape in 1992, sentenced to 6 years’ jail and had more than 40 arrests for assault and various petty crimes. Dismiss him as an incorrigible criminal? He could have been boxing legend Mike Tyson.

The problem with our self-centred, impatient and unforgiving society, is that people are too slow to admit their their own mistakes and too quick to dismiss others as hopeless.

Can Amos Yee be rehabilitated? Is there still a future for him? Maybe, maybe not. I wouldn’t bet on it, but I’m hopeful that his rights will be protected and there won’t be any political agenda this time. Hopefully, the moronic PLPs won’t try to take a shortcut to another frivolous “victory” by claiming that those who sympathised with 16-year-old Amos were supporting paedophiles.

Now getting back to Miss Yulia Tsevetkova’s case, we need to recognise that these are young people who are still being moulded by various influences in their societies (and the internet). Amos Yee is only 21 and Yulia Tsevetkova is only 27. What if Yulia Tsevetkova grew to be a paedophile or a kleptomaniac in her old age? Does it mean that those who supported her activism during her younger days when she was fighting against gender stereotypes were wrong? Sadly, there are childish and insecure folks (some in high places) who would seize every opportunity to say “I told you so.”