In A Different Light 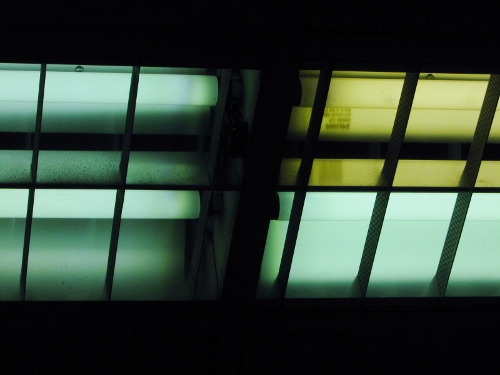 The long, 36W fluorescent tubes in my office are now 7 years old. Not surprisingly, they are beginning to fail; one by one. So I went down to the electrical shop and the owner recommended me a new model of fluorescent tube that gives “true colour”. True colour is indeed quite important in my field of work, but I was hesitant about buying such expensive
fluorescent tubes. Still, he was persuasive, so I decided to buy one and try it out. The glow did look a bit different, but I didn’t take notice until another tube failed within days of the first. This time, I bought four tubes and replaced the failed one along with a couple of others which looked like they were going to fail.

The results were quite stunning. My whole room looked new. It’s difficult to describe it, but there’s something soothingly white about the new illumination. Even though a few of the tubes were still of the old variety, the presence of the 4 new tubes overwhelmed the boredom that used to pervade the room. I felt refreshed, energised. I even had a sudden urge to tidy up the mess on my table and make everything look more presentable.

I’ve decided that when I renovate my publishing office at Hougang next year, I must get some of these “true colour” fluorescent tubes. There is so much to say about publishing. I’m not a greenhorn in this industry, but making a comeback with all the new and exciting technology is going to require some re-learning. I just obtained the ISBN for my upcoming book. I didn’t even realise that the ISBN for an e-book is different from that of a printed book. Lots to learn.

But my writing and publishing days have to be some of the happiest days of my life. I didn’t earn big bucks, but it was enough extra pocket money for me to travel to Thailand frequently. The video below reminds me of one of my assignments. I was writing for a magazine and my editor wanted me to interview 玉女掌门人 Vivian Chow and ask her about her role as “Courtesy Ambassador”. Huh? Yao mo gao chor ah?

The above video features Vivian singing live at her own comeback concert (2010) with veteran Taiwanese songwriter 林隆璇. Some observers said that Vivian seemed to have injected preservative into her face. Indeed, she didn’t age much.

Mediocre vocie, stunning looks (and I’ve surprised that she can play the piano). That’s how I remember Vivian Chow 周慧敏 when she went into retirement in the late 1990s. But really, the photos didn’t do her justice. She’s much prettier in person. I waited at the room at Mandarin Hotel for one hour before she arrived and apologised profusely to all of us. Actually, it was not her fault as the she came direct from the airport and her flight was delayed. With little or no makeup, her face was virtually flawless. The only thing which spoiled it all? Her mannerisms. Yes, she talked like an Ah Lian.

After all the other reporters have asked their usual questions about her music and love life, it was my turn to pop the question my editor wanted me to ask.

“What is your role as Courtesy Ambassador?”

“Oh, I’m just here to encourage my Singaporean fans to be more courteous during your Courtesy Campaign.”

“Do you think there is any need for Singapore to hold such campaigns.”

“Oh yes.” she said without hesitation. “Actually, every country in the world should hold such campaign, especially in Hongkong where life is so hectic that people often forget their manners.”

The other reporters were shocked that I have actually asked such a meaningful question, but the took the cue and started talking about the courtesy campaign, happy that they can finally engage this Ah Lian in a more meaningful discussion.