Living In The Past? 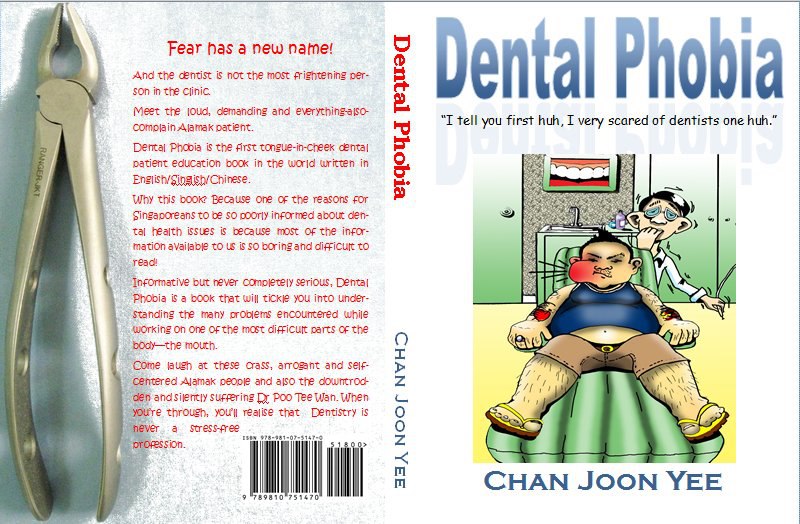 I’ve finished designing the cover for my next book – Dental Phobia. Though the cover is often as important as the text content, I often spend a lot more time on the latter. Once I’ve given the content a final check, I’ll just email the files to the printer. The digital age, in spite of all its negative impact on the joy of reading and attention spans, has greatly simplified the process of printing.

Not everyone looks positively at the publishing industry – especially when you’re talking about printed books. To many people, books are so yesterday. When I told my friend Ronald that I would be doing publishing last year, he was puzzled and wondered aloud why I was going into an industry from which everyone in it was trying to exit. Borders has pulled out of Singapore. Times and MPH are shadows of their former selves.

Sad to say, one of the people who despises writers most is my own mother. That’s why I sarcastically dedicated my second novel to her. But make no mistake, the reading public is smaller than ever before. Our potential readers are too engrossed in their touchpads to pay much attention to books (unless they can teach them how to get rich fast). Understandably, our bookshops are struggling. Even though my book is moving at Kinokuniya, how many copies can I sell with only 3 branches here in Singapore? So why am I making a comeback in this industry, releasing my next book probably by early June? I can only say that I’m taking a calculated risk and above all, there is passion. You can’t depend on passion to put bread on the table, but in the event that it does, it keeps you going. Remember Singa? It’s a literary magazine published by the Ministry of Information and The Arts. This issue was published in 1990 and I found it, crumpled and dusty under a pile of junk. Yes, it has been 23 years since I first laid hands on this issue of Singa. I’m not sure where I’ve kept the other issues. Hard copies they are, but even then, they don’t immortalise the contributors. I wrote and publish a lot from 1988 to 1993. When my translation of Wai Choy’s travelogue was serialised in the Straits Times weekly over several months, we became household names. Still, that won’t immortalise you. 20 years away from the publishing industry and even household names can be forgotten. Yes, it’s the Simon Tay we all know

I contributed 2 poems in this issue and the magical thing about looking back at these old issues of Singa is that even though I may not be able to relive the past in its entirety, I can at least savour those joyful moments. I guess it’s only logical. If you were happy back then, you must have been doing something right. If the daily grind and other family issues are taking their toll on your physical and mental health, then perhaps, a revival of abandoned passions may inject a breath of fresh air filled with fragrances from the past. I’m not aiming for immortality. A dewdrop should depart after it has sparkled its brightest. I have not reached that stage yet. A lot more to write.