PM Yingluck Shinawatra’s position has become decidedly shaky after rice farmers, supposedly her supporters, started blocking roads when China cancelled its deal to buy 1.2 million tonnes of rice from Thailand. Many rice farmers who had already sold their rice to the government but who were yet to receive payment are now left in the lurch.

Protest leader Suthep Thaugsuban blamed the farmers’ predicament on the government. But whose fault is it really when the government’s caretaker status restricts its options for raising funds. The law prohibits it from making any deal that could create a debt burden on the new administration. As such, it is struggling to find 130 billion baht (S$4.9 billion) to pay farmers for the current crop year. All those who block the elections and keep the current government in caretaker status are the ones the rice farmers should confront. Block roads and join in the protest? That will only ensure that they don’t get paid.

About a month ago, a Singaporean friend of mine, GS, joined in the protests. GS proudly shared his photos on Facebook. I’ve already given up trying to talk sense into him. With his current thoughts, orientation, inclinations and political affiliation closely aligned with his girlfriend’s, I consider him “spellbound” and hopeless. When another friend asked GS why he wanted to kaypoh (to the extent of risking life and limb) with another country’s politics, he simply replied that the current government is corrupt and he wanted to help Suthep Thaugsuban get rid of it.

And that’s the same answer you get from all the Democrats and their supporters on the streets. Of course, amongst the latter, you will find those who simply can’t stand Thaksin’s face. Again, allow me to get back to my moral high horse analogy. When these folks appoint themselves as prosecutor, judge and executioner, it’s so easy to jump on the bandwagon and adopt a Hollywood perspective of good vs evil. There are also many Farang faces among the demonstrators. I wonder if they’re also following their Thai girlfriends like GS.

Get the Democrats to weed out corruption? Appoint a council? Enforce good governance? Why not whitewash with ink?

Below is a picture of former Thai PM Chuan Leekpai. During his time, he was regarded as one of the least corrupt Prime Ministers (albeit ineffectual) Thailand ever had. Having spent quite a bit of time in Thailand back then, I could tell that as an individual, Chuan did have popular support. But not the Democrats. Let’s see why.

1. In 1999, Rakkiat Sukhthana, Health Minister (appointed), was charged with taking a five million THB (125,000 USD) bribe from a drug firm and forcing state hospitals to buy medicine at exorbitant prices. After being found guilty, he jumped bail and went into hiding.

2. Suthep Thaugsuban, then Minister of Transport and Communications (elected), whose brokering of illegal land deals caused the fall of the Chuan’s first term (1992-1995) as Prime Minister, was linked to abuse of funds in setting up a co-operative in his southern province of Surat Thani. His son was also involved.

3. The “edible fence” seed scandal, in which massive overpricing of seeds distributed to rural areas happened. The Deputy Minister of Agriculture was forced to resign.

4. The Salween logging scandal, where up to 20,000 logs were felled illegally in the Salween forest in Mae Hong Son. Some of them turned up in the compound of the Democrat party’s office in Phichit province.

5. Sanan Kajornprasart, Interior Minister, as well as 8 other cabinet ministers were found to have understated their declared assets. Sanan was later barred by the Constitution Court from politics for 5 years.

6. Chuan himself was found by the National Counter-Corruption Commission to have undeclared shareholdings in a rural cooperative.

Of course, the Farangs and people like GS have girlfriends to humour and they don’t let the facts get in the way of their opinions. To them, Thaksin is the most evil and corrupt person in Thailand – because their girlfriends said so. To me, he is really the lesser of two evils. But the fact that Suthep’s supporters didn’t leave him in disgust even when he threatened to kidnap the Prime Minister and members of her family goes to show that too many Thais don’t care about right or wrong when hatred fills their hearts.

If you visit Thailand during a beautiful season, away from the madding crowds, it may look like paradise. If you befriend someone in his best of moods, you can’t help thinking you’ve made a friend for life. If you happen to visit Thailand when savages take the stage with no regard for the law or even basic human decency, cheered on by clueless foreigners who need to humour their girlfriends, mistresses etc, you may never want to come back again. I’ve been through many ups and downs in the Land of Smiles as I contemplated settling down. This is why I’m procrastinating. 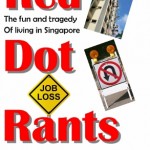