When I first moved into Punggol 13 years ago, we were like pioneers colonising some newly discovered territory. There were only some flats on one side of Punggol Field and Edgefield Plains. The LRT was still under construction, Punggol Plaza was still a skeleton and Sengkang East Drive was not even open yet. No one had even heard about the KPE.

For several years, the residents at Punggol 21 “endured” the lack of amenities. Someone even wrote to the press complaining about how Punggol 21, hyped as the model waterfront town of the 21st century. Sadly, the waterfront town next to the MRT station did not materialise. For me, there was really no issue. I worked at Hougang. The food and shopping there were good and affordable. Back home after a hard day’s work, I was greeted by vast open fields which provided me with much breathing and stretching space in our crowded city. On weekends, the skies would be teeming with kites of all shapes and sizes. I used to conduct sunset walks like this. Not many people turned up, but even back then, I knew that things would not remain that way for long.

Then came 2010. Punggol 21 Plus kicked in to give our frontier town a touch of sophistication. Hoardings were erected around the MRT station and along Sungei Serangoon. When I ran along Punggol Road, I found that even the beach was hoarded up. They were constructing the mighty Punggol Waterway. In our PM’s speech on the grand opening of the waterway in Oct 2011, Mr Lee said:

A central feature of Punggol 21 Plus was this Waterway. It started off as a pipeline, because we have Punggol Reservoir on one side, we have Serangoon Reservoir on the other side – PUB reservoirs, to collect water because we need water to drink. We needed to connect the two reservoirs, and the original plan was to connect them using a pipeline. Most practical, most unexciting. But when the plans went to MND, Mr Mah Bow Tan, who was the Minister, said no, do not build a pipeline, let us make this a waterway. Make it something beautiful, something which Singaporeans can enjoy, something which can be special for residents, and which we can build on and appreciate for many more years to come. And it is because of that decision that we have today this Punggol Waterway and this project successful in Punggol. Some people even call it the “Venice of Punggol”. Mr Mah Bow Tan is not able to be with us here today, but I think we all owe him, especially the Punggol residents, a big vote of thanks for this and many other things which he has done for us.

How nice of Mr Mah and indeed, if the sole purpose of constructing the waterway was to give us something we can enjoy. But like all nice things in Singapore, there is always a purpose or motive behind the niceness. 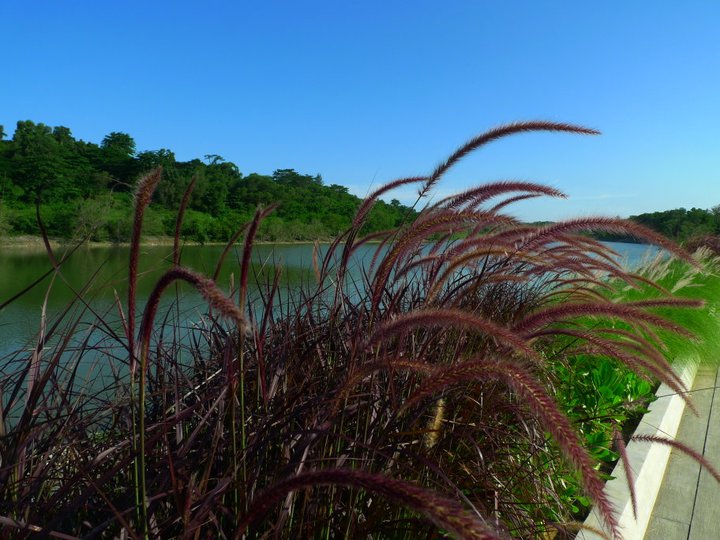 Not long after the waterway was unveiled, peaceful Punggol saw amazing weekend crowds. At the MRT station, I was asked dozens of time for directions to get to the waterway. As I wove my way through the weekend throngs, I overheard more than a few families making plans to move here. The value of our property soared. I saw fliers slipped under my door almost every day with offers to buy my flat at 3 times my purchase price 10 years before. It was insane. Yes, the waterway is nice, but you can always take the MRT here. Why do you have to buy an overpriced home here? Because you foresee the kind of capital gain the pioneers are seeing?

Remnants of reeds at the same location 2015

Mr Mah Bow Tan was not Minister for National Development for nothing. He must have predicted kiasu, kiasi, gian png Singaporeans’ reaction to the waterway and his successors followed through with a slew of construction projects. It’s 2015, the weekend crowds are now seeing a very different waterway. The fanciful kites that filled the sky have also disappeared. But most worrying, the waterway is apparently withering. The beautiful brown reeds along the former Sungei Serangoon are now a bunch of headless stalks.

The hole in the wooden platform has been there for at least two weeks. The leaves that have collected in it are so telling.

Thankfully, there are some “survivors”. These are located away from the edge of the water. New species have also been planted on the inner aspect of the walkway.

Few Singaporeans, addicted to the good life, would object to any of these projects. The waterway is a draw, an attraction, an investment. It all boils down to sales, business, profits and anticipated capital gains.

But look at what has happened here. The dry phase of the Northeast monsoon may soon be upon us, but we are still seeing a fair bit of rain every other day. Why are these plants rooted at the edge of the water, all withering?

These reeds used to be beautiful. There’s still plenty of water in the waterway. What happened?

There used to be a wall of reeds here. All that is left are some headless stalks.

Compared this with pictures I took with my younger son in 2012. Note the difference!

Check out the same marginal plants which were so green and healthy when my son was standing next to them just 2 years ago. What has happened?

This is “Jewel Bridge”. It marks the end of the Sungei Punggol side of the waterway. From here, you can watch sunset on one side and get a great unobstructed view of the waterway on the other.

Oops! They just built another bridge across this part of the waterway. This is all you can see from the bridge and understandably, I don’t see people taking wedding pictures here anymore.

I’m not a botanist. I don’t have an expert opinion, but I’m just suspecting that the rapid deterioration of the waterway may have something to do with the rampant construction that has been going on. Which is our priority? Business or ecology? If the waterway could not have been built without jamming the land with luxury “eco-homes”, then I would prefer to live in the old Punggol 21 which is probably far more ecological.