It has been a great week as far as material for yao mo gao chor ah is concerned. There was some talk about Chinese opera Liang Zhu in Parliament and there’s also some discussion about But first, a little story about my good friend’s first trip to Thailand.

My Malaysian friend Mr Koh Wan Boon was really excited about his first trip to Thailand. But don’t get him wrong. Mr Koh absolutely abhors sleaze. An exemplary figure with a puritanical image to project, Mr Koh told me from the beginning that he was only interested in Thai cuisine, temples and cultural shows. It was only towards the end that I finally managed to persuade him to watch the Tiffany Show at Pattaya.

“A very decent show.” I replied.

“The performance is world class. I guarantee.”

A complete newbie to Thailand’s sleazier side, Mr Koh was only vaguely aware of what he was watching – a very professionally produced stage show with beautiful women in resplendent dance costumes, dancing gracefully to familiar tunes and songs. It was all very entertaining, even for Mr Koh. He took many photos and videos. Then, he told me that he had to go to the toilet. 30 minutes later, Mr Koh was still not back in his seat. I went to the toilet to check on him and saw a couple of guys carrying him out in a stretcher!

“What happened?” I asked him when he regained consciousness on a hospital bed.

“Tell me it was just a nightmare!” he cried. “I went to the bathroom and I was peeing at the urinal when one of the girls dancing on stage just now occupied the urinal next to mine, pulled up her skirt, pulled out her … his … and started peeing …”

I had a hard time suppressing my laughter. I forgot to tell Mr Koh that the Tiffany Show is one of the world’s most spectacular transvestite shows. The performers are all very convincing male impersonators. Till this day, there are members of the audience who refuse to believe that even after being informed beforehand.

“Oh … just because they looked so pretty and danced so gracefully, I just assumed that they are women. You know, there’s a very popular Chinese opera, Butterfly Lovers, or Liang Zhu which describes the period of old China when girls, unfortunately, no matter how talented they were, were not allowed to join schools. So, there was this very young, beautiful, talented young lady, Zhu Yingtai, who wanted to study, so she disguised herself as a boy and succeeded in attending the school for three years. People just assumed that girls won’t turn up, and because they made the assumption, they discovered it only later in hindsight and asked: “Why didn’t you know?” 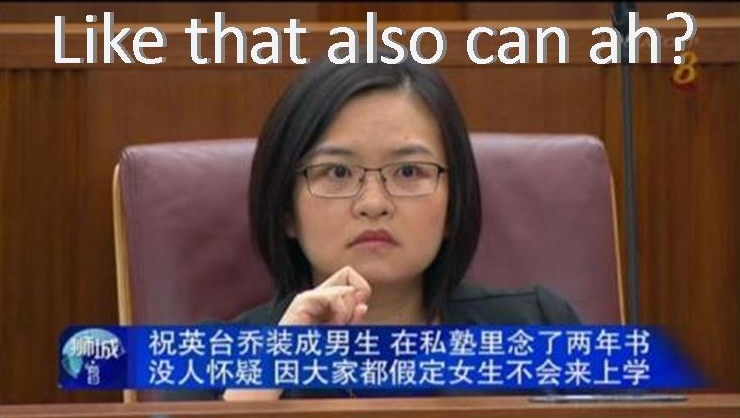 “I understand, Mr Koh.” I said thoughtfully. “Zhu Yingtai’s classmates were all brilliant scholars. If they couldn’t tell that she was a female impersonator, then how can we expect you to be able to tell that the Tiffany girls are actually boys? For your own safety, you’d better not come to Thailand anymore. The more often you come, the more shocking things you’ll see. Your doctor won’t survive if he keeps charging you $8 for bypasses.”

Let’s get back to air-con nation Singapore where everything is regulated. Anything that is not explicitly allowed is implicitly disallowed. Our Bugis Street has been thoroughly sanitised or “cleaned” if you will. Littering is an offence, but if the rubbish bins are full or not available and there’s no one watching, what do people do? Our behaviour under such circumstances has a lot to do with the way Singaporeans have been trained (not educated) to keep the environment clean.

SINGAPORE – On Wednesday, Prime Minister Lee Hsien Loong called out festival goers for not picking up their litter, and asked Singaporeans to make Singapore a clean city rather than a “cleaned” one.

A day later, Emeritus Senior Minister Goh Chok Tong has taken to Facebook to do the same.

Comparing Tokyo and Singapore, he said that the Japanese capital had no rubbish bins in public places, but it is still litter free.

“Without foreign workers, Singapore is likely to become a ‘garbage city’,” Mr Goh said in the post.

Our PM made a very good point. We should aspire to be a clean city and not a cleaned one. But how do we go about making people feel that they have a part to play in keeping the environment clean? What have we done all these years? We fined people, we banned chewing gum, we shamed the repeat offenders by making them clean the streets. Fear of punishment made us use the ample rubbish bins provided. People are just abiding by the law. They consign rubbish to rubbish bins and want no part in the management of litter. When we are out of this chain, our co-operation breaks down when a link is missing – like there are no rubbish bins in remote, virtually uninhabited mountain areas. Who is going to collect litter in such a vast wilderness? Yet, I’ve seen many responsible trekkers who truly care about the environment carry their rubbish with them. For people who have been trained and deterred from littering by tough laws, it’s the authorities’ fault for not providing rubbish bins.

Although the newsPAPer mentioned our two leaders’ remarks in the same breath, read closely and you may notice that the implication in Mr Goh’s remarks is somewhat in conflict with our PM’s. In his anxiety to defend the size of our foreign workforce, Mr Goh seemed to be stressing the importance of opening our doors to more foreign workers and keeping them here. Without them, our city would be inundated with garbage. That is absolutely true. But to continue importing and relying on them would run contrary to our PM’s wish to make ours a clean city and not a cleaned city. If we want Singaporeans to take pride and responsibility in management of litter, then all the more, we should cut down on the supply of foreign cleaners.