The experts have spoken. TODAY commissioned the laboratory test yesterday (March 3) using a water sample provided by a fish farmer operating off Pasir Ris. The sample was taken last Saturday when most affected fish farmers reported the sudden deaths of their stocks.

The test showed concentrations of the algae at 88,529 cells per mm – a “very, very high” concentration, according to Dr Hans Eikaas, head of environmental technology and chemistry at DHI, a not-for-profit group offering consultancy and water-modelling services.

How do you get such a high concentration of algae? Could it be… never mind.

Interestingly, reports from AVA and the study commissioned by Today got different results. Dr Eikaas’ team reported that a species of algae called Gymnodinium has been found in the seawater samples they examined but AVA said its preliminary findings point to the Karlodinium veneficum species, which has been associated with fish kills in several locations worldwide. Which is it? Explaining the discrepancy, DHI Water & Environment said that the seawater sample they tested was examined at a magnification of 400 times.

At that level, species of algae belonging to the Karlodinium and Gymnodinium groups would appear very similar. To be able to positively identify the algae species, a genetic test or a microscope with 1,500 to 2,000 times’ magnification would be needed, said Dr Hans Eikaas. Apparently, Dr Eikaas doesn’t have that kind of a microscope in his lab. I wonder what the AVA’s magnification is.

So is it Karlodinium or Gymnodium? Today further revealed that Karlodinium veneficum is known to produce karlotoxin, an agent responsible for fish kills. This is getting curiouser. So it is the karlotoxin or gill damage that killed the fish?

The AVA said the dead fish had gill damage caused by plankton. No marine biotixins have been detected in fish samples from affected farms and live fish harvested from the farms are safe for consumption, it added.

Wait a minute. This is even curiouser. It was AVA that said it was Karlodinium that was responsible. Doesn’t Karlodinium produce karlotoxin?

A little more about Dr Hans Eikaas. He contributed to a very interesting and informative article and let me draw your attention to the following excerpts.

Freshwater Biomonitoring “Biological monitoring” or “biomonitoring” is the use of animals and plants to
detect change, often due to pollution, in the environment….

… In the freshwater environment, fish algae and benthic invertebrates are effective “bioindicators” of pollution or disturbance because they demonstrate differential sensitivities to pollution. In the case of freshwater algae,
some species are of particular concern with regard to toxic algal blooms, so they are often monitored as a water quality concern of their own right as well as indicators of enrichment, particularly in lake systems.

This article is found here. Note that in the article, Dr Eikaas is identified as coming from PUB while in Today, he is an expert from DHI Water & Environment, a “not-for-profit” group offering consultancy and water-modelling services.

Finally, here is a picture of Dr Hans Eikaas that I managed to find on the web. It may help explain some things, but certainly not why the fish died.. 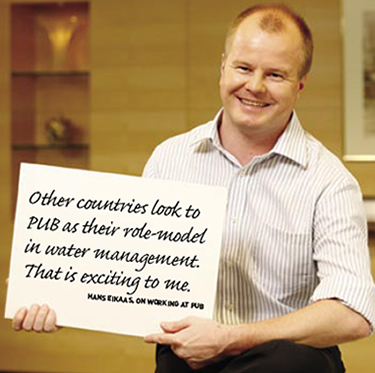