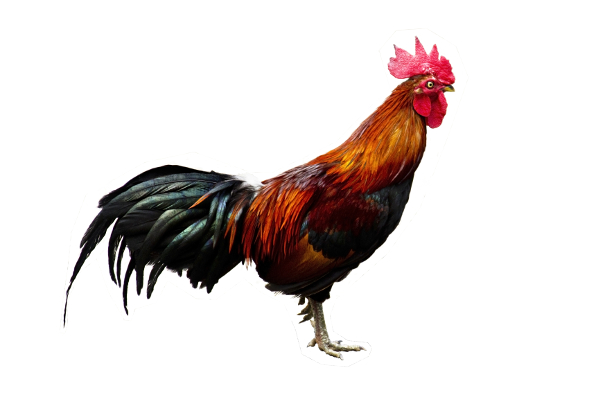 We’ve just ushered in the year of the rooster. All over Chinatown, we see lights and decorations celebrating an animal that is often regarded more as food than a pet. Nevertheless, I do have childhood friends and relatives in Malaysia who have kept chickens as pets. As time passed, these birds would normally just grow old and die. Never did they end up in pots and pans as the folks who saw them hatch and grow up from furry little chicks couldn’t bear to slaughter and eat them. As a fellow human being, I can fully identify with such feelings. 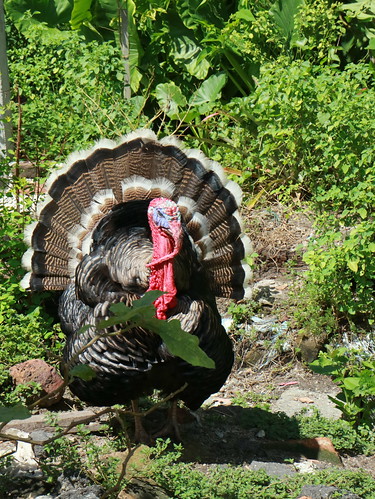 The picture above is that of a turkey which I took among the ruins of Papan, Perak – my mother’s hometown where I have many fond childhood memories of kampung life. Back unlike the kampungs in Malaysia, chickens are not “natural” to our urban environment here in Singapore. On the first day of February, Today reported that the authorities have put down chickens that had been roaming freely around Thomson View and Blocks 452 to 454 Sin Ming Avenue after receiving complaints about the noise they made. The perpetrator, the Agri-Food & Veterinary Authority of Singapore (AVA) revealed that it had received 20 complaints from residents about the free-ranging chickens last year, most of them related to noise.

A friend of mine posted an interesting observation on Facebook – in the year of the rooster, only lifeless roosters are celebrated. The live ones are killed. He was not alone. I’m not sure if they’re vegetarians, animal lovers or Donald Trump haters, but quite a number of netizens seemed disgusted with AVA’s drastic measures. Was there a need to cull the birds? Did they attack anybody? Did they make so much noise that people couldn’t sleep at night? Or were they so loud that they couldn’t hear themselves singing karaoke?

Our newsPAPers were quick to respond to justify AVA’s actions. The very next day, our Straits Times ran a report suggesting that all free-range chickens will be on their hit list (words in bold are mine). 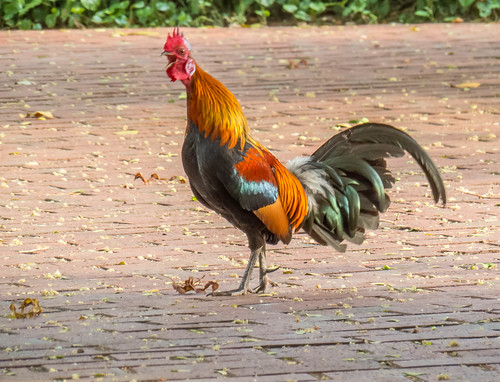 The authorities are planning to cull chickens that are running wild all over Singapore.

The Agri-Food and Veterinary Authority (AVA) said it will take action whenever it receives complaints about noise.

The National Parks Board is also mulling over a similar move, but for a different reason: Concerns that the chickens may interbreed with their endangered ascendants, the native red junglefowl.

“Growth in free-ranging chicken populations increases the potential of interbreeding with red junglefowl, and will adversely affect the conservation of our native species,” Dr Lena Chan (expert no. 1), group director of NParks’ National Biodiversity Centre, told The Straits Times.

The red junglefowl is native to Singapore and is nationally endangered, she added.

On the other hand, said Dr Wee Yeow Chin(expert no. 2), founding president of the Nature Society (Singapore), chickens are domesticated birds and have no conservation status.

Dr Wee, who heads the Bird Ecology Study Group, added that with rapid interbreeding, the native species will gradually be reduced and be replaced by hybrids.

Wildlife consultant Subaraj Rajathurai (expert no. 3) said the hybrids could also encroach on the nature reserves, where they take away native animals’ foraging opportunities.

Dr Chan (expert no. 1)said NParks will be partnering the local conservation community to strengthen the protection of the red junglefowl.

“This includes monitoring the overall red junglefowl distribution and population size, studying the extent of interbreeding and managing the population of free-ranging chickens.”

Though they may look similar, the red junglefowl has a number of distinct traits that set it apart from domesticated chickens.

Red junglefowl, unlike chickens, can fly and are also quieter.

Their calls are high-pitched and truncated, whereas roosters – male chickens – have a recognisable call that is louder and longer.

But Dr Wee said: “Contractors should be able to tell the difference between the two and not indiscriminately cull all ‘chicken-like’ birds.”

However, the authorities said purebred red junglefowl are known to occur only on offshore Pulau Ubin and the Western Catchment area.

“To address these, AVA works with NParks to conduct surveillance and control operations to safeguard public health and mitigate nuisance issues,” she said.

Last year, AVA received reports from residents of the Pasir Ris and Thomson areas complaining about the noise from free-ranging chickens.

You can read this article and watch a video explaining that the chickens culled have no conservation value over here.

What a powerful response, but for me, the issue is not about whether the birds have any conservation value at all, but whether there is a necessity to take their lives just because some people are unable to tolerate the background noise that is pretty characteristic of absolutely livable and friendly kampungs.

But in their haste to squeeze and squirt expert opinions all over us, the media has failed to check the facts. Another expert weighed in on the matter. 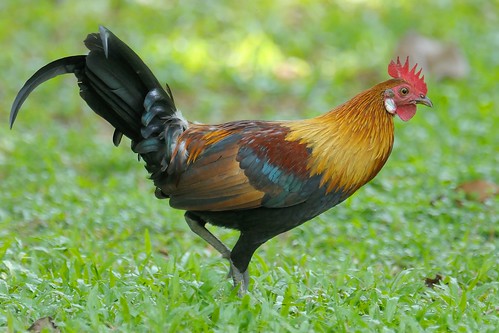 Assistant Professor Frank Rheindt (expert no. 4), from the National University of Singapore’s department of biological sciences who believed that the authorities did the right thing from an environmental perspective.

The professor explained that it would not be feasible to relocate the chickens to Pulau Ubin — which has a population of red junglefowl — because it would result in a “contamination of the gene pool of the wild stock of junglefowl that we’re lucky to still have”.

“Wild junglefowl are still very precious, and conservationists want to preserve them in their wild state as best as they can. If you create a situation where domesticated or hybrid chickens can inter-breed or hybridise wild junglefowl, it would certainly have a giant effect on the native junglefowl roaming (in Pulau Ubin).”

He added: “Every day in Singapore and across the world, hundreds of thousands of chickens are killed for human consumption, so I do not believe there is a valid ‘animal rights’ argument against the culling.”

Then came the big revelation, thanks to our nature lovers. Photos of the birds taken at the site revealed that the birds did in fact belong to the rare and endangered species of junglefowl. Our newsPAPers had shown misleading photos of domesticated chickens and not the actual birds at the site. Supporting that claim is MediaCorp’s own TV documentary “Wild City” which featured wildlife in Singapore. The film identified the birds at the site as the Red Junglefowl, the ancestors to our domesticated chickens. It showed that the chickens had grey legs and that they could fly.

Have our experts been “chickened” into toeing the official line? Is our army of yes-men bigger than what we might have imagined? What good are experts whose chicken crap are exposed by amateurs? For supporting the official stand without examining the facts, let’s award each expert with a CB leaf to hide his/her face.

But before I’m accused of hypocrisy or get labelled as a fanatic by the folks who support the culling, let me state categorically that I don’t have any emotional attachment to the birds at all. I love roast chicken, chicken curry, chicken rice, salt baked chicken and I don’t have a problem killing those chickens for food if the alternative is to have people go hungry. But to have them “humanely euthanised” and their carcasses dumped because their voices can’t blend in with the urban din? I’m afraid our zero tolerance for any kind of “nonsense” has gone too far and neatly explains the “others don’t matter” attitude that is so prevalent in this society.