Training To Be Soldiers To Fight For Our Land

An ang moh couple was travelling to Singapore on their honeymoon (don’t ask me why they chose Singapore). They checked into a hotel provided by the travel agency and immediately complained to their guide. 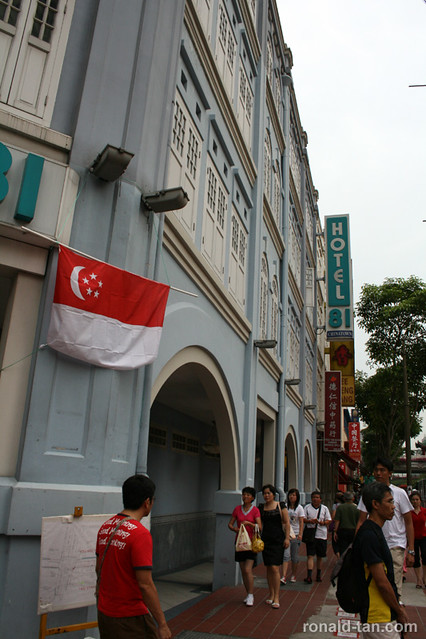 “We booked a luxury tour. How can you put us up in a room like that?” the groom protested. The bride scowled.

“A room is a room just as milk is milk. You come back here every evening to sleep. Besides, how much space do you need to have sex.” replied the guide as he would state a matter of fact.

Of course, this is only a story and I think I know the kind of people who can imagine the bride and the groom shaking the guide’s hand and apologising for not be understanding enough. In the real world, the guide would probably end up in hospital. Unless of course, the guide is somehow “untouchable”. And as anyone with cognitive powers beyond that of a monkey can tell, the moral of the story is not about whether the guide’s statements were factual or not, but whether they were appropriate in the context of the story.

Sure, we all know that a room is a room and you only need it to sleep in (or have sex unless you prefer the great outdoors), but we have a free market economy here (or so I thought). The folks who book a room at Hotel 81 are well aware of better-furnished, dearer rooms at the Ritz-Carlton. Similarly, the folks who book a room at the Ritz-Carlton are also aware that there are cheaper rooms at Hotel 81. We can’t assume that these folks are bozos who allow themselves to be ripped off by the Ritz-Carlton just as we can’t assume that folks who fly First Class aren’t aware that economy class gets you there just as fast. People exercise their choices based on value, circumstances and occasion. What business does the government of an open economy have to encourage people to go for rooms at Hotel 81 when what they are really asking, is for Ritz-Carlton here to be priced proportional to some global indicator like a Big Mac Index. If the question of why Brand A in this country is much more expensive than Brand A in a country with comparable per capita GDP, then it’s insulting to cop out of the issue and ask the folks to go for Brand C.

When someone tells you that you’re his friend, what would you expect when you receive a bill from him? Would you expect a discount? Or would you expect to be ripped off? It happened to me a few times in India. Having gotten quite friendly with a taxi driver, he used our “friendship” as an excuse to charge me more. Sure, friendship can’t be measured in dollars and sense, but what if it is used as an excuse to take advantage of the other party? Let’s take a look at another analogy I posed on Facebook a while ago. A man loses his job. He cuts his son’s allowance and says “Daddy’s love for you can’t be measured in dollars and cents.” That’s consoling and understandable.

If the man strikes it rich, splurges on outsiders while he continues to scrimp on his own son and still tells him “Daddy’s love for you can’t be measured in dollars and cents.” then that is insulting.

The thing that infuriates here is not the issue of giving more or less. It’s about using ridiculously lame issue to justify fairer compensation. Even “we can’t afford it” could have been a better excuse. Now let’s avoid distracting arguments on the analogy itself and get to the actual statement. 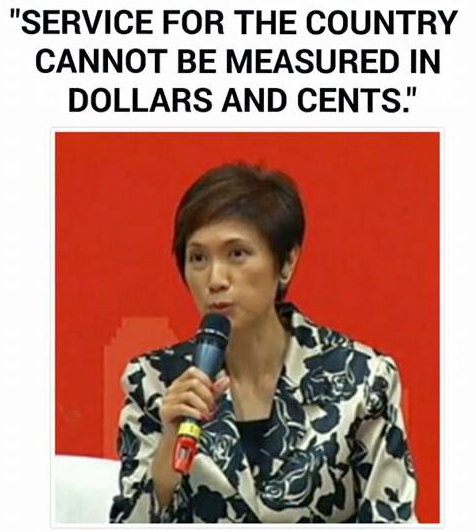 Taken out of context, it makes perfect sense as my lecturer friend Prof Wong had pointed out. But what is the context here? Let me present a couple of scenarios from firsthand experience. Many years ago when I was still reporting for incamp training, I would need to claim my loss of income from MINDEF. To their credit, they paid promptly – even before the incamp started. Now, for the less pleasant part. I bought a lot of expensive new equipment through a leasing company. My costs went up a lot. When I submitted my claim, I claimed for gross income. When MINDEF received my income statement from IRAS, they asked me to return money. They only allowed the claim of net income and not gross income.

Let’s look at the numbers.

If they pay me a net income of $10,000, that will only cover my expenses of $10,000 leaving me with effectively zero net income. I called them up and explained my situation. The clerk was quite polite, but her hands were tied. For any profitable business, they would only allow a claim for net income. 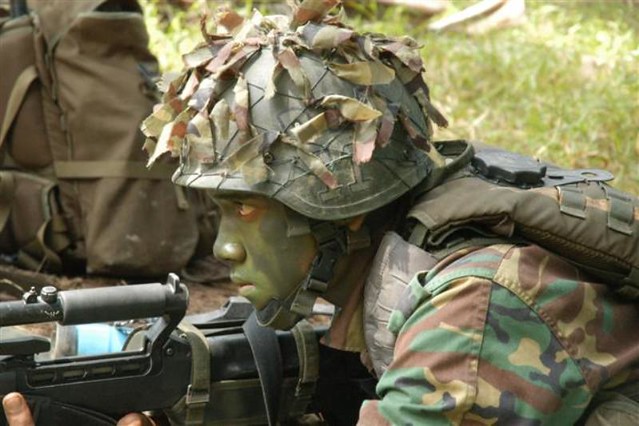 Then, there was my friend, a commercial pilot. Let’s call him HL. At an incamp work seminar, he asked if NSmen could get more recognition for their sacrifices. He pointed out that as a pilot, his colleagues who were foreigners were logging in a lot of airtime in his absence and getting promoted faster than he was. He was polite, but quite serious. We were all stunned and I’ll never forget the reply that HL got.

Our commander (who had never worked a single day in the real world) pointed a finger at him and said “Don’t use NS as an excuse for not doing well in your career.”

Of course we shouldn’t use NS as an excuse not to do well in our career, but aren’t there numerous typical as well as atypical situations where we have indeed been severely short-changed? Why assume that we are undeserving? Had it been my commander instead of the clerk who answered my call, I’m sure I wouldn’t have received such a polite reply.

At the end of the day, our citizen army is not just guarding our key installations and protecting our people’s lives and property. They are also protecting their own rights and interests from various forms of “invasion”. What if we feel like we’ve already been overrun by foreign forces? What if we feel like we have been sacrificed to further the cause of our competitors?

General Yue Fei killed numerous Kin soldiers in his campaigns to recover lost land. He was never defeated by the enemy. His own people killed him.