Going After Bullies And Forgetting The Ones Who Fight For Us 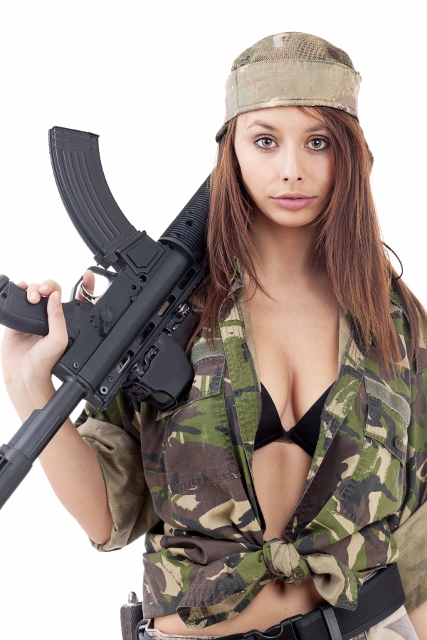 A couple took full advantage of an intellectually disabled Annie Ee who lived with them, taking her pay, making her work like a servant and even subjected her to physical abuse, torturing her till she finally died with 12 fractured ribs and seven fractured vertebrae, a ruptured stomach and a body crowded with blisters and bruises.

Of course, all this did not happen overnight. Over a period of 8 months, the very normal-looking couple, who could have walked around any neighbourhood in Singapore without attracting any undue attention, grew progressively audacious in abusing the victim as she suffered in silence. It started with insults and verbal abuse. Things got physical and then, they got violent. However, the victim could not have walked around unnoticed with all her wounds. Why did no one try to help her? Why wasn’t anybody in her neighbourhood even curious about her injuries? It was only after the perpetrators have been arrested that heroes started to emerge, condemning the couple and calling for blood. Isn’t it a bit too late? Here is the interesting exchange I had with one Douglas Tan. 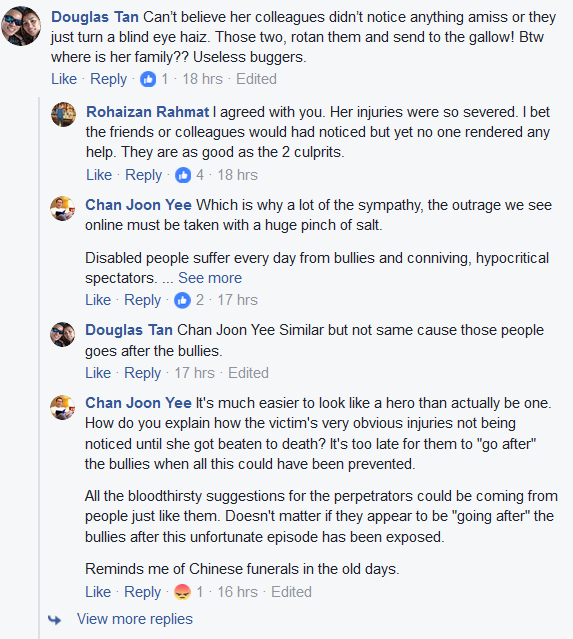 I have a question for the heroes. Do you mind working or living with someone like Annie Ee? What would you have done in the couple’s shoes? Put up with her “nonsense” and take good care of her? Even some parents of autistic children lost their patience and have abandoned them. It’s not easy! We need to acknowledge the fact that we are very, very far from being a gracious and compassionate society. Parents of autistic children have to deal with disgusted looks from members of the public on a daily basis. Actor Adrian Pang wrote that “One parent I spoke to ended up making cards to hand out to passers-by as they “tsk tsk”-ed their way past her son as he had a meltdown — usually caused by the overstimulation of crowds or loud noises. The card simply informed them that he was autistic and asked for their understanding.”

You can check out the full the full article here. Were the couple who tortured Annie Ee to death monsters? The frightening answer is no. They are the average, impatient, self-centered, quick-tempered and vindictive Singaporeans you find on the streets. They are just two of those who go go tsk tsk tsk at the sight of someone with disabilities who has created annoyance or inconvenience in public. Put Annie Ee with another average, impatient, self-centered, quick-tempered and vindictive couple and she could have met the same fate.

This is why parents of disabled people sometimes murder their own child when they know that their own end is near. That’s because they are so sure that the child would suffer a fate similar to Annie Ee’s after they are gone. If we could keep our eyes for a second longer on intellectually disabled people on the streets, we are bound to notice traces of Annie Ee’s ordeal on them. She was merely an extreme case.

Meanwhile, on the socio-political front, activist Jolovan Wham has been arrested and charged with various offences ranging from vandalism to holding a public forum with a foreign speaker without a permit. You can find all the details here. Most disturbing was a post by Kristen Han reporting that her attempts to contact Jolovan ended with a reply from the police who stated that his offence is “non-bailable”! 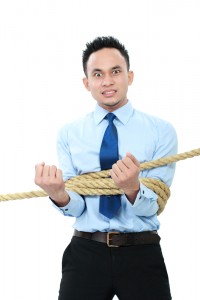 I was often curious how former politician Vincent Wijeysingha could have suddenly become so quiet after GE2011. Well, he finally broke his silence after his colleague Jolovan Wham got into trouble with the authorities. In a recent Facebook note, he revealed another shocking thing. He said that his former boss felt intimidated after a visit by “our friends” and he decided to to find a job in the UK, virtually living in self exile. Vincent had asked me to share his note. You can read it here

Now let’s go back to Douglas Tan’s claim of going after bullies. Going after bullies? So which came first, our social apathy or our political apathy? I don’t have the answer but I believe in the strong connection between them. If you don’t stand up for justice in one area, you won’t stand up for justice in another area either. It’s too taxing, too inconvenient, too dangerous even. Politicians can say things that insult our intelligence but the majority will still support them as they hold the country’s purse strings and are in full control of policies which may benefit them. The hell with everyone else. As long as the majority are still able to live comfortably, the boat stays afloat. Why rock it for the sake of a bunch of dreamy, idealistic activists? Is it any wonder that our NS men are not appreciated or respected? Can we be as vicious towards the enemy as that couple who tortured Annie Ee? Hell, no. Bullies like them tuck their tails between their legs at the sight of a stronger opponent. 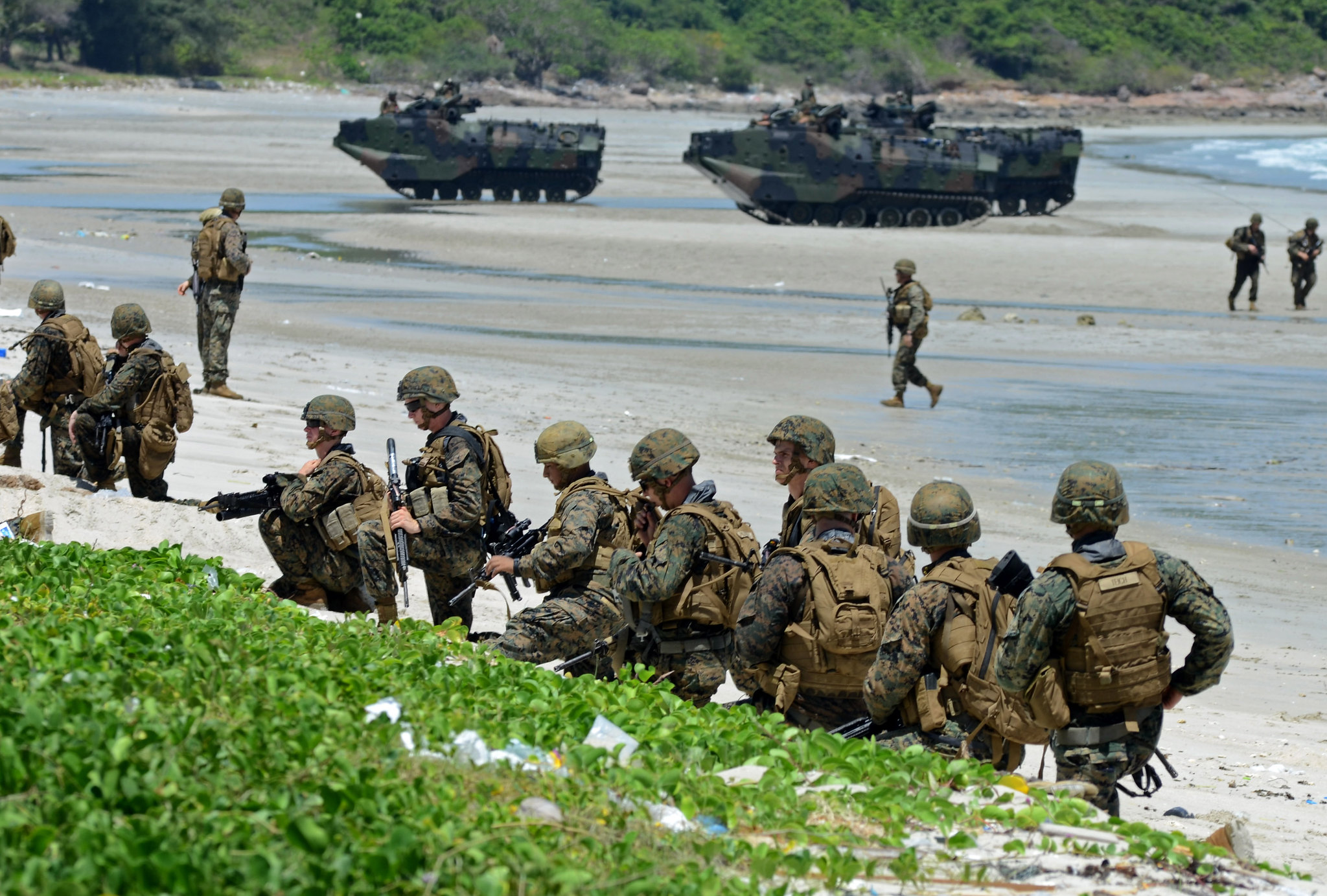 So what else new? Gong Cha is back. What? Gong Cha is back? For a moment I thought it’s Gong Li returning home with some massive scandal in tow, but as it turns out, Gong Cha is an F&B business that sells adulterated “tea” in nearly a hundred different flavours. I’ve tried it in Taiwan before and as a genuine tea lover, I would rate the various mixtures as soft drink and not real tea. I’m not surprised that it’s a hit with young people as it is rather similar to bubble tea, but to attract crowds that queue for hours before opening is so uniquely insane of Singapore. Never mind that they are just peddling tastes/flavours and not even something that benefits health.

It gets better. Retailer Don Don Donki opened its doors at Orchard Central, selling Japanese products at discount prices. Like spilled syrup, it attracted a swarm of eager ants. Friends who have visited reported a mad rush ala World War II rationing exercise. Is there any urgency to own any of those products on sale? Frankly, I can’t think of any use I would have of most of the products sold there. I’ve often wondered if I don’t belong in these crowds, does it also mean that I don’t belong in this country? Is there any other purpose to life here?

This is what drives Singapore. This is a city state that runs like an economic dynamo. Produce and consume. Produce and consume. There is no other purpose in life. No shame, no guilt in ignoring the truly needful either. Just self gratification and happiness. Everything else is superfluous. Everyone is a happy consumer.