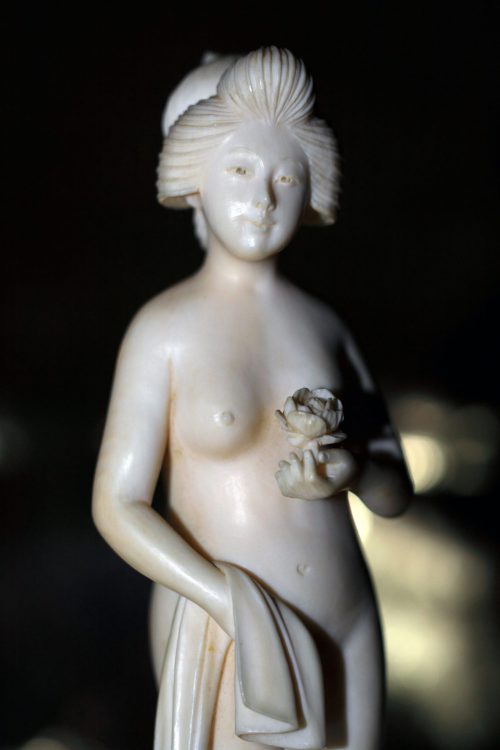 I’ve just finished reading the book The Last Girl by Nadia Murad. It’s an autobiographical book by a young lady who had gone through more than what most people had in several lifetimes. After witnessing a massacre of her people, she was molested, raped, sold into sex slavery. This is the story of how she escaped from the clutches of ISIS to help survivors of genocide and victims of human trafficking.

I can’t help comparing Nadia’s home with the situation or rather the lack of any comparable situations in Singapore. That includes the steadfastness, heroism and altruism of some Iraqi people in the face of ISIS. But while I find Nadia’s story intriguing, few hedonistic Singaporeans would be bothered with things happening over 7,000km away in busted and blasted Iraq. It’s not a crime not to care. There are bigger concerns like going back to the proverbial hamster wheel.

Mention freedom and human rights to these very focused folks and all you’ll get are a few yawns. The usual responses to dismiss the discussion are 1) There’s nothing I want to do (play video games, eat, drink …) that I can’t do 2) You can’t have human rights for lunch.

I can’t argue against the first point; we all have our visceral needs, so let me just deal with the second one. We can’t eat freedom and human rights. What about clothes? You can’t eat your shirt either. Do you need it? What about your children? Can you eat them? 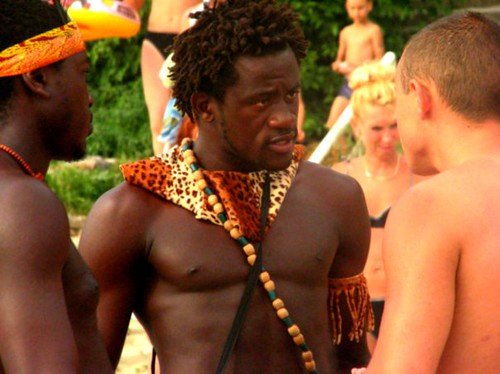 According to an article in an article in the Economist, Taliban controlled regions in Afghanistan have much fewer cases of Covid-19 infection than Afghan government-controlled regions. This is not surprising. Authoritarian regimes and compliant populace are the best combination for pandemic control. Freedom can lead to uncooperative or even deviant behaviour like the clown you see below. Try that with the Taliban and we won’t even find your ashes.

But let’s get this straight. Covid-19 will not be around forever. The pandemic will end, but we can’t say the same for the Taliban. Without freedom, democracy and human rights, they will not just disappear like sickle cell anaemia.

Then, there was this journalist who highlighted a case of freedom of (mis)information leading to riots in some African nation. Unlike some simplistic democrats, I believe that there is a time to get tough. I agree that if necessary, a state of emergency can be declared and the jokers who interfere with urgent measures to save lives could be locked up. That’s because there is a huge difference in what works in a prosperous state 盛世 and what only works in a troubled state 乱世. The mistakes made by Western forces in the Middle East are largely due to their inability to distinguish between 盛世 and 乱世. However, the rules that apply in a troubled state should not extend into a peaceful and prosperous state.

I do not for one moment believe that racists have gone extinct in the free world, but it’s important to distinguish between individuals and the system. Consider the following Facebook posting and the comment by someone by the name of Jonathan Toh. 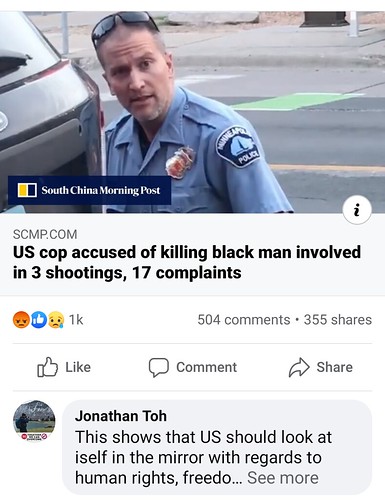 Jonathan’s comment shows a lack of understanding and perspective. That’s like blaming the author of the textbook when the student had failed the exam. Why do you think that the American cop’s actions could even be reported in the news? It’s precisely because there freedom of information and the rule of law in the country. What happened to Canadian businessmen Xiao Jianhua who was abducted in Hong Kong and brought to the mainland? What happened to Chen Qiushi? How did Lei Yang and thousands of others die in police custody in China without even being mentioned? What happened to the thousands of Uighurs, Tibetans and Falungong members who were never heard from again after they were taken away by the authorities? They don’t even make it to the local news in China, let alone Facebook. These are not mistakes of individual law enforcement officers. These actions are orders being carried out. I’m sorry Jonathan, but your mirror is badly distorted.

Sure, America does not have a perfect system and there are evil characters within its administration and the police force. But when tragic events occur due to personal failings, there is an openly available procedure for pursuing justice. Can you say the same for the families of people who simply vanished after the police knocked on their doors in the middle of the night? If brought in by the Chinese police, would someone like Miss Meng Wanzhou be treated the same way that she has been treated in Canada?

This is a book that has kept me reading till late at night. It’s about the life of a top forensic pathologist in the UK. The dead don’t give trouble, but Dr Shepherd still had a stressful job. A mistake can cost an innocent defendant his life. A jury can reject the most solid evidence and barristers can raise doubts on the most obvious findings.

23,000 bodies later (he was involved in performing autopsies for 911 and Bali bombing victims), Dr Shepherd’s ultimate challenge would come from within – family issues, PTSD and depression. Writing this book (and sessions with the psychologist) saved him.

UK’s top forensic pathologist Dr Richard Shepherd sometimes felt frustrated and indignant when astute and anal-retentive defence counsels discredited his findings and even questioned his professionalism. The whole legal process in the UK is terribly inefficient. But unlike some of the busy hamsters in Singapore who dismiss “freedom” and “human rights” as superfluous, inefficient or even troublesome, Dr Shepherd doesn’t want any changes in the system that would make his job of convicting criminals easier. That’s because he realised how important these hard-nosed barristers are if he ever ends up in the dock one day.

Glossing over the legal process is welcome by folks whose egos do not allow them to imagine that they would ever end up in the shoes of lesser mortals. There are times when having something to wear is more important than having lunch.