What Covid Phase Are We In Now? 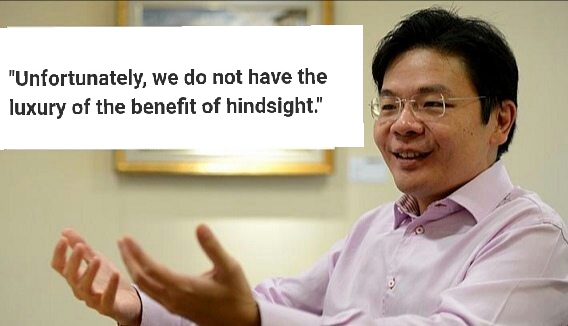 First of all, my heartiest congratulations to Mr Leong Sze Hian for successfully raising the full amount in damages awarded to our PM in the defamation suit. Graphics courtesy of Dr Ang Yong Guan. But as some of us were celebrating, Mr Leong had also drawn some flak from both sides of the fence. Naturally, the PLPs will say that he should have used his own money, but even some of the folks who had been against this bullying said that Mr Leong should have made up for the shortfall with his own money since he’s not exactly an poor man. I disagree with this argument.

Why? Because this would have dulled the impact of the crowdfunding. The message from the people is stronger if the entire amount is raised from people who don’t know Mr Leong with each contributing just $50.The impact would be even stronger if each contribution had been just $2. This means that more than a few people are irked by the outcome of the legal process. The numbers speak for themselves. They demonstrate the strength of the protest against the bullying of people who have questions and opinions.

The deadline for the settlement of legal costs and disbursements was sent out with just a few days’ notice. It was probably calculated based on the observation that Mr Leong’s crowdfunding plan might have run out of steam. If Mr Leong Sze Hian had paid for the shortfall himself, he would have missed the golden opportunity to show to the world (not just Singapore) how this devious plan has backfired.

Next, the latest (and worrying) Covid situation here. MOH reported that we have 409 imported cases (with 271 from South Asia) in last 28 days. It’s not mentioned how many people we actually imported. On Saturday, 15 May 2021, MOH sent out a strangely worded announcement on FB. They didn’t appear to be reporting. They are also “explaining” why it’s not the government’s fault for importing a dangerous new variant from India. It’s happening everywhere.

Yao mo gao chor ah? The virus breached our safety measures? You can say that the 8,890 km land border between US and Canada is porous. You can even say that the 3,145 km border between the US and Mexico is porous, but how many Mas Selamats managed to sneak in and out of Singapore undetected? Our borders are not that porous. They’re deliberately open to folks travelling from high risk countries while the rest of us have forgotten where we put our passports.

Next, let’s say Kim Huat’s report card is a sea of red. Why? Because he has been playing video games when he ought to be studying. He explained “Ah Hock also failed so many subjects what.” Does it mean that playing video games has nothing to do with Kim Huat’s poor results? Whether Ah Hock played video games or not is immaterial. The fact that Covid is seeing resurgence in other countries does not mean that our folks didn’t make any mistakes at immigration. As usual, we have pathetic academics who play apologist for our porous … correction, leaky borders.

Strangely, all this sounds awfully like Calvin Cheng and for a moment, I even thought that he might have just become the spokesman for MOH. The Indian variant of Covid was first discovered in October last year. As early as March this year, cases have been exploding in India. If mediocre folks like us can get worried and would have ordered our own doors shut to travellers from high risk countries, why is it that our ministries can’t do that?

Earlier on, I have crossed swords with pathetic academics who tried to defend the continued import of travellers from India and those on transit from soon-to-be-affected neighbouring countries. Like politicians, they conveniently twist this into a racial/xenophobic argument. And that, I fear, could happen in Parliament when it’s brought up for discussion. Can the spectators stay focused and not be hoodwinked? Before GE2020, Zaobao journalist Han Yong Mei had tried to defend the Covid election by saying that it’s rare that we get a chance to elect our leaders at a time when they can show how well they manage a pandemic. True indeed, though not in the way Ms Han would have us believe.

With the election results being somewhat “disappointing” (to the PLPs), Ms Han wrote another article saying that it showed that people were more concerned about democracy than the pandemic. Would people have voted differently if the elections were held on schedule, or a little delayed and not early? Seriously, I’m not optimistic. You may see folks complain a lot, but at the voting booth, there are “other concerns”.

Then, there was also this lame excuse about delay in the construction of BTO projects as a major concern. I’m surprised that it’s still being brought up by the usual apologists. If everybody with flu symptoms were to see the doctor and get 3 days’ MC pending swab test result, then every conceivable sector is going to be delayed. Even wedding plans have to be put on hold now. Still worried about not getting BTO flats on time? That’s like being waist-deep in water and worrying about your feet getting wet.

What is this going to mean for businesses? I really don’t know. What I do know, is that the small businesses that had gone bust last year have all been sacrificed in vain. Meanwhile, hang in there, folks. If you have nothing to do at home, do pick a read you may like at Dewdrop Books. I’m not crowdfunding, but if so much “favouritism” has been shown towards foreigners, certainly you can afford to support a local writer.