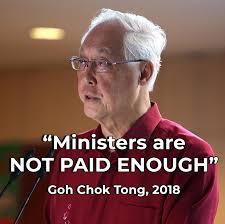 Lousy schools. First, let me backtrack a little. 14 September 2021. During a marathon debate on two motions on jobs and livelihoods in the House, Manpower Minister Tan See Leng and Mr Leong had several exchanges after Dr Tan had delivered his speech.

At one point, after Mr Leong had spoken, a voice could be heard saying “he’s illiterate”.

Later, after another exchange between Dr Tan and Mr Leong, a microphone picked up someone saying: “Seriously, how did he get into RI?… Must have been a lousy school.”

It is understood that these remarks were made by Dr Vivian Balakrishnan.

Dr Tan was then heard replying: “I’m from Monk’s Hill.”

In response to queries from The Straits Times, Mr Leong said he received a call from Dr Balakrishnan on Wednesday and that the minister conveyed his apology for his lousy school comments.

Mr Leong said he accepted the apology. The outcry was not as big as the one we got from umbrage general, but the apology notwithstanding, we the plebeians know exactly how revealing that “slip of the tongue” actually is. While it’s undeniable that a certain degree of meritocracy does exist in this society, it’s also quite obvious that those who have “arrived” (proven themselves academically and affiliated themselves with the right political party) are accorded privileges in an exclusive club which imbues its members with a deep sense of entitlement and superiority. Our office holders are the highest paid in the world. Real estate in the vicinity of “branded” schools is valued considerably higher than that around neighbourhood schools. Is every school a good school? Really? We know better than to embrace political whitewash.

That’s not the saddest part. The saddest part is the acceptance of this concept of superiority/inferiority. My secondary school song had one line that went “The best school of all, New Town Secondary School” and I remember well that in Sec 1, many of my classmates could not sing that line without suppressing laughter. After a while, we got so used to it that we just mouthed the words unconsciously.

Even at a time before streaming, this concept of superiority/inferiority existed. With streaming, it gets even worse. From lousy schools, we’ve now got lousy classes even in good schools. While the fast students are further fast-tracked, the slower ones get demoralised. Friends in the teaching profession feel the stress and the burden of making things work in the lousy schools and classes. Students in the normal stream might not have presented with so many issues if not for the negative energies concentrated in one class. Our society which is pretty much all economy and no humanity, conveniently lumps people into tribes of various grades and worth based on their residential addresses and academic achievements. More bad news as Covid numbers still bouncing around the 3,000 mark.

Not being a minister, I had no idea how many masks we had last year and how many hospital beds we have for Covid patients this year, but we trusted our leaders.

At this time of writing, our healthcare workers are running on empty, those recovering from home have complained about protocols impossible to follow, hotlines being jammed and we almost had a riot at a workers’ dormitory. Our newsPAPers reported that workers at the Westlite Jalan Tukang dorm had posted images of their fellow workers who had fallen ill not being cared for, some for almost a week. Photos that have surfaced online showed workers believed to have Covid-19 infection sleeping at the corridors and walkways outside the dorm rooms. Infected workers who ought to have been isolated had also not been attended to. Aside from a lack of timely medical support, they also claimed poor living conditions, and that they were given food that had worms or had gone bad. The workers got together and confronted the management. Tempers flared and the riot police was called in. At this time of writing, the workers seemed to have stood down. It still looks like a mess and our health minister explains that it has something to do with the virus not following his script.

Let’s shift now to a less explain script from a much lower paid expert, Prof Paul Tambyah. Prof Tambyah is the first Singaporean to head the International Society of Infectious Diseases

These points were also mentioned in a live video broadcast on Facebook on 14 October 2021. Did you watch? I’m not surprised if you didn’t because when I tuned in, there were only about 300+ people watching at any one time – yep, fewer than Kimberly Chia and Quan Yifeng.

Do we ever question why is only one political party is involved in this? Does it matter if Prof Paul Tambyah joins the MTF? Personally, I don’t see a problem with that, but just like our concept of good school and lousy school, some people may have an issue with having someone from a “lousy party” regardless of how much better qualified he is compared to those who go by scripts.