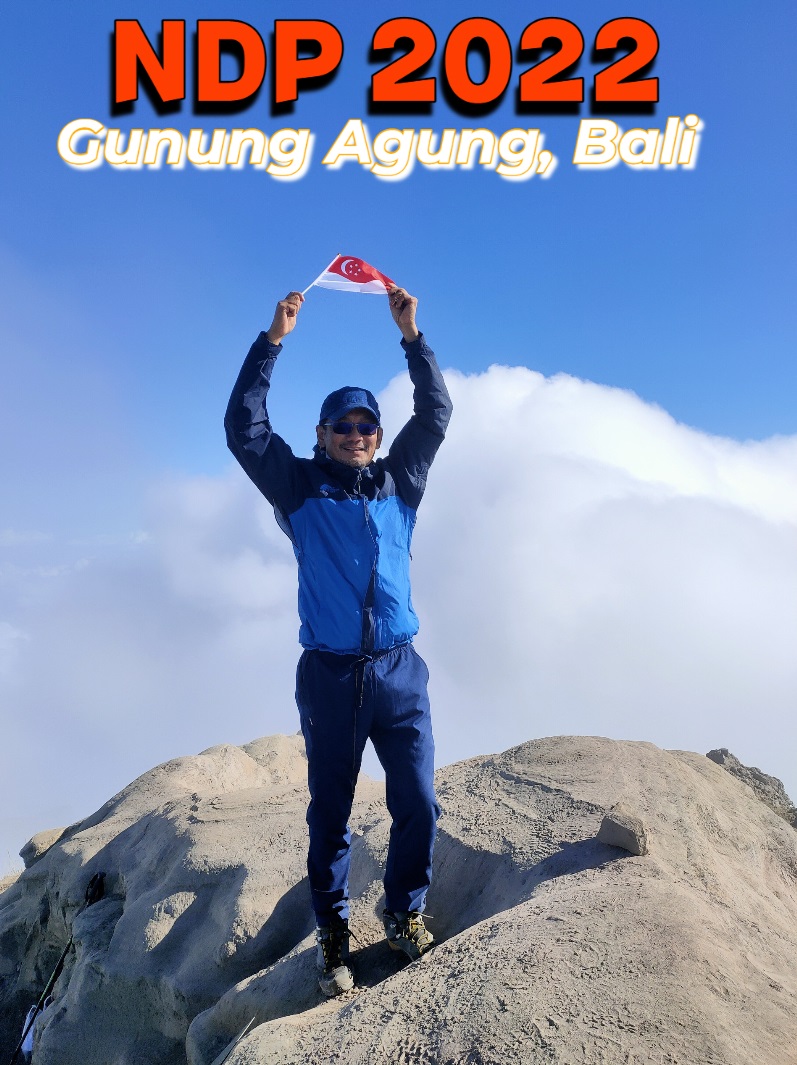 Singapore celebrated her 57th National Day on 9th August 2022. It’s a day for all Singaporeans regardless of race, language, religion or political party. 3 During the NDP celebrations, WO Jeffrey Heng, one of the members of the Red Lions parachute team, suffered a rough landing during the parade itself. He was the last of the 10 parachutists to land. Apparently, the wind conditions at that point in time was unfavourable. The incident, which took place at about 6.00 pm, drew concern from both spectators at the floating platform and people watching the parade at home. Videos and photos of the incident were quickly shared on social media, showing army soldiers attending to 3WO Heng. Minister Ng later updated us, saying that 3WO Heng’s condition was stable and he is expected to make a full recovery. Take care and speedy recovery, WO3 Heng.

After a 2-year hiatus, I decided to revive my own NDP. Normally, I would fly in to Jakarta and then proceed to the next 3,000m Javanese peak I had chosen to climb. However, when I booked the ticket in May, Jakarta still required a PCR test for visitors. Bali, on the other hand, was fully open. I decided to go to Bali. The trouble is, I don’t have much of a choice as far as mountains go because there is only one 3,000m peak in Bali and that is Gunung Agung which erupted between 2017-2019.

Agung’s difficulty lies not in its altitude but its steep incline. There is very little flat ground to rest or to to camp. The path goes relentlessly uphill. Most people who climb Agung climb from Pura Pasar Agung and only manage to reach Puncak Selat at the southern crater rim of the volcano which only reaches an altitude of about 2,800m. It’s a 4-hour climb The true summit of Agung, Puncak Sejati, which is on the western crater rim, is directly accessible from Besakih on the western slope. It’s a much tougher 7-hour climb and I decided to take this route for NDP 2022. I will share the details at knapsack Treks and YouTube when I’m ready. Below is my summit shot. 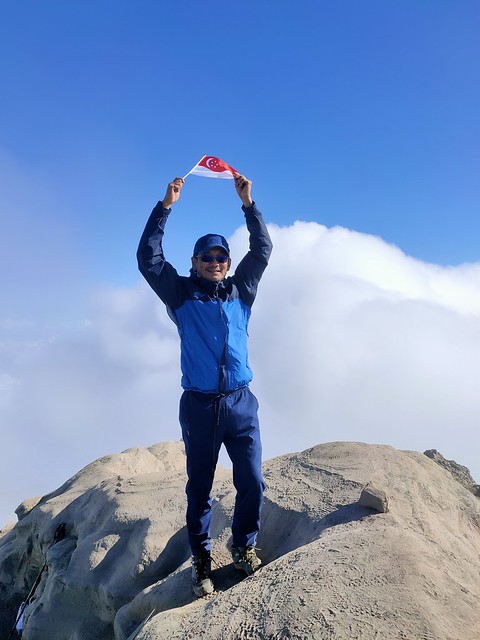 It was a tough climb for a 58-year-old, but I have fully recovered. Impressive? Well, for this impossible mission, I got something like 60+ likes on Facebook. And I’ve been doing National Day Pendaki for 6 years (with 2 Covid years in between). Of course, the more Singaporeans know about it and cheer me on, the more encouraged I would be to do the next NDP climb. If not, I’m happy if a couple of dozen friends could cheer me on. If my aim had been to go viral and be famous, I would have realised that I’ve failed miserably and given up 6 years ago. It’s just not working, but I don’t mind. I’ll still go on, self-sponsored if I might add. But it’s working for some people – foreigners and our very own Stomp publicises for them.

A Filipino domestic helper completed a 57km run on the morning of National Day to celebrate Singapore’s 57th birthday. If that sounds familiar, that is because Stomp had reported earlier this week that four other runners had accomplished the same feat on the weekend before National Day. Stomper Jeanette said that she had wanted to join those runners, but she was donating blood on Sunday morning (Aug 7). She set out on her own 57km trek on Monday at 11.15pm.

“I started my run at home, near Somme Road, all the way to East Coast. One time around East Coast Park from area A to H, then one time around Kallang River to Marina Barrage. I ended my run near Gardens by the Bay,” she told Stomp.

“This is for you, Singapura,” she posted on Facebook and added: “I still can’t believe I could do it.”

It was the first time she had run such a long distance. She had never even completed a marathon of 42km before. 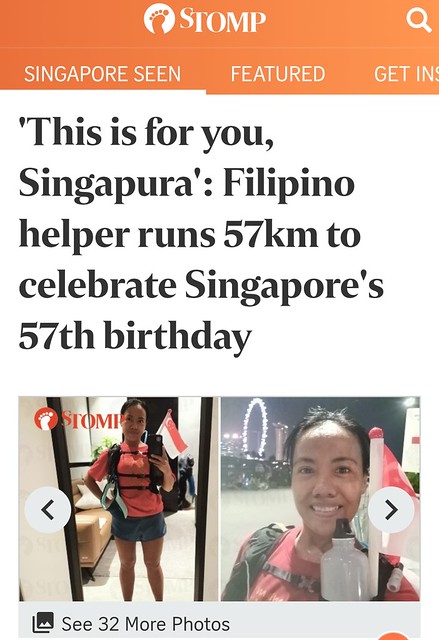 Of course, the folks who passed derogatory remarks about her are being mean. I respect and appreciate what she had done. But I can’t help wondering. What if I had chosen to run 57km instead of climbing Gunung Agung and all the other gunungs on my list? Would Stomp feature me? What about all the NS guys? How many km have they run throughout their years in service? Did anyone cheer for them? Maybe a new citizen who never had to serve his NS will get the same attention if he pulls off the same feat. Why does it look like we are appreciating the contributions of foreigners while taking our own people for granted?

“But if a foreigner comes to Singapore and becomes a citizen as a mature adult, typically in his 30s or 40s, we exempt him from National Service because he did not enjoy any socio-economic benefits like young Singaporeans and also because he would be too old to enlist for full-time National Service.”

What if we don’t enlist them for fulltime NS? What if we recruit them as we would our reservists – something which I was personally liable until age 45? What if these folks start running 58km, 59km on our National Day and Stomp cheers for them? Too old for NS?

– I see 30yr olds at the gym, cycling, running, doing marathons, ironman etc. So it can’t be too old or unfit right?

Service is not just about firing weapons, it can be about taking care of others?

– We lack people in civil defence, hospitals, homes etc, why not have national service around those areas.

– they do enjoy the stability, safety, tax benefits, education, jobs/careers that have been built up

Makes sense? Certainly. If they want to become Singaporeans, then they jolly well contribute as much as well do. But make no mistake, foreigners would not migrate here if they do not consider our pastures greener than that in their home countries. And of course, we must also not assume that our government is all out to give foreigners who take up citizenship a free lunch. This is where cost versus benefits come into the citizenship equation. For the sake of our dignity, no matter how rich they are, we should only accept those who have a genuine desire to call this home. We must never sweeten the deal at the our own expense to attract the reluctant migrants who are OK with running 58, 59, 60km on National Day without any NS liability.

And by the way, if I’m still alive and kicking come 9th August 2023, I’d be doing my NDP at age 59. True Singaporeans in their 40s are too old for PMET jobs. New citizens in their 40s are too old to serve NS? Yeah, right. Fact: a Singaporean friend of mine who migrated to Australia and joined the army there went through OCS at age 43. Are we so desperate for new citizens that we have to exempt them from NS at the expense of true Singaporeans?