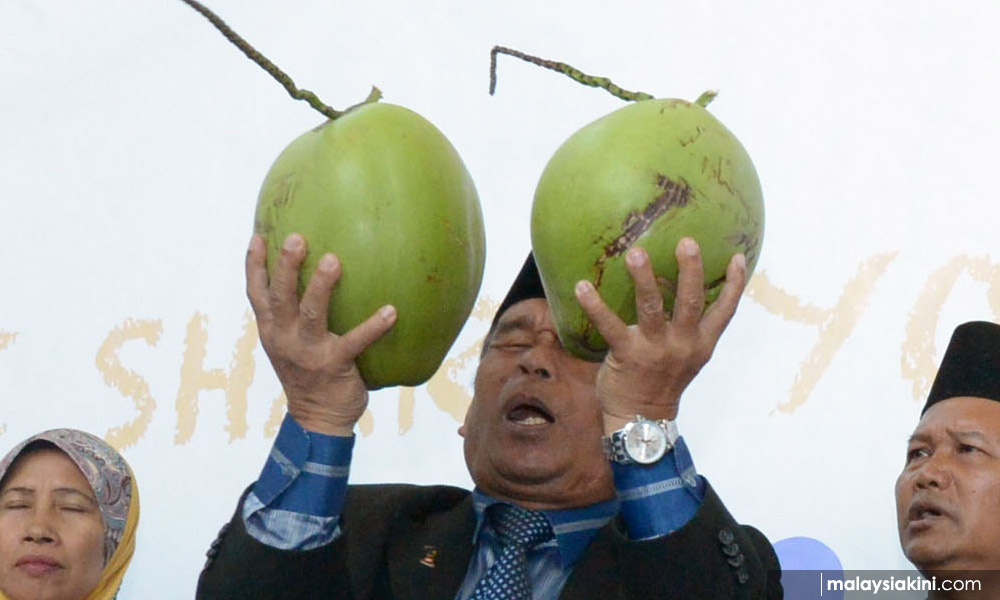 A post on buying coconut drink while holidaying in Thailand led to an exchange of views between local actress Joanne Peh and two netizens on social media.

Peh, who is married to actor Qi Yuwu and has two children with him, recently posted several photos of their family vacation in Thailand.

About a week ago, Joanne Peh shared a photo of her helping herself to a big coconut drink at a stall by the beach on Koh Phi Phi (near Phuket).

She posted in Chinese: “I feel that coconuts are too expensive in Singapore and am reluctant to drink coconut water. I felt the same when I was in Phuket for a few days, until I saw this sign on Phi Phi Island and recalled it was the local product. I decided to get a big one right away.”

While something like that posted by mere mortals like us would not have attracted much attention, Joanne Peh received a couple of somewhat unpleasant remarks.

Netizen A: “A coconut costs $2.50 in Singapore. Surely you will not be ‘reluctant’ to get one?”

Joanne Peh: “Where can I buy the $2.50 one? A small one in the supermarket costs more than $3 and it is gone after a few sips. This one was so big and sweet that I felt drunk after drinking it.”

Netizen B: “Have you heard of ‘humble brag’? Your reluctance to buy something which costs $3 is puzzling.”

At this point, Joanne Peh got a bit flustered.

Netizen B: “Very well said, but I think your reasoning makes more sense if it costs $300 or $3,000, but I respect your point of view. I think a lot of people can’t comprehend why a millionaire can’t bear to part with $3. We are all living in an era where students with no income are spending $5 to $8 on bubble tea. Hence knowing a celebrity not willing to spend $3 on a coconut is just weird, but you do you.”

No response from Joanne Peh after that. By the way, nobody seemed to have pointed out that 60 baht for a coconut that size is pretty expensive by Thai standards. As the netizen rightly pointed out, it’s almost the same price as in Singapore. She could have gotten it much cheaper outside the tourist belt in Thailand. In other words, she didn’t even realize that she had been unknowingly confessing that she had been ripped off, thinking that she kio tio.

If you think I would pay attention to such frivolous stuff because I’m a fan of Joanne Peh, then you obviously don’t know me. It caught my attention because this incident, which has gone viral, reminds me of “humble brag”, “virtue signal” and other hypocritical acts that I often encounter when dealing with colleagues, acquaintances and even people I consider my friends. Perhaps it’s an Asian thing, but when a person is rich and/or successful, acting frugal seems to be the politically correct thing to do. This is especially so when our influencers are always showing off their lavish lifestyles and things aren’t looking rosy for the common, less glamorous folks who can turn from adoring fans to vicious foes at the mere scent of a scandal.

Take the example of Big Boss P who is always careful not to appear arrogant. He is right at the top of the corporate ladder and his income is probably comparable or even higher than some of our ministers’. When he returned to Singapore after making his fortune overseas, he bought a piece of landed real estate with a swimming pool. Recently, Big Boss P broke a root canal treated tooth and had to do a crown. Even though the “damage” wouldn’t make a scratch in his bank account, he couldn’t stop complaining about how much it cost him, how he had to scrimp on other things after paying his dentist and the “best” part, he “envies” dentists who probably only earn a fraction of his pay. No, I’m not a busybody like Netizen A or B but I felt inclined to subtly call him out for false modesty. I don’t think he got the message.

While thrift, humility and frugality are undoubtedly virtues among celebrities and billionaires, astute friends and netizens are not fooled by gross exaggerations. Joanne Peh can only convince us that her reluctance to spend on coconuts in Singapore is due to her thrift if she had been consistently showing frugality and giving money-saving tips to her followers. Not that I care whether she was just humble bragging or virtue signalling, it’s best that when we encounter such behaviour within our own social circles, we should just give these folks a stamp of insincerity.

Just to give you some perspective, I know Thai people working in Singapore and earning SGD who don’t find coconuts here expensive at all. Of course, when they go back to Thailand, they would buy even more. The thing is, why make an issue out of it? Obviously, Joanne Peh saw it as an opportunity to signal her “virtues”. A bit awkward and contrived if you ask me – just like in Big Boss P’s case.