Study mamas are foreign women who accompany their children to Singapore while their children receive primary and secondary-level education. The study mama phenomenon began in 2000, after the Singapore Government relaxed its immigration policies to attract more foreigners.

Published in China, this is a book by a study mama from Chengdu, Sichuan Province. Her name is Shi Qing Tong and she arrived in Singapore with her son in 2003. I shall not dwell too much on how she groomed her child. A lot of the book is on that. Instead, I’ll just focus on her observations of “enigmatic” Singapore. As the book was published in China, we can’t expect her to be too frank about why she wanted her son study in Singapore. She only referred to herself as 孟母 meng mu, changing the environment for the sake of her child. In other parts of the book, she revealed that she wanted her child to have a better grounding in English.

Of course, studying in Singapore does give the Chinese children some immersion in an English-speaking environment. As for why English is so important to them, we can only make a guess about their future plans which they probably can’t reveal in a book published in China at risk of being labelled “unpatriotic”.

The amount of money that Shi had to raise to come to Singapore is summarised below. These are 2003 figures and the amounts today should be much higher:

Shi didn’t mince her words talking about her disappointment with Singapore. First, it’s our eating habits and on this point, I fully agree with her. She found it curious that many Singapore homes have kitchens which are almost the size of the living rooms and yet they are mostly unused. In all the rooms she had rented during her stay in Singapore, none of the landlords permitted cooking.

With an engineering background, Shi considers herself upper middle class in Chengdu. Even then, her family considered it financially prudent only to eat out during special occasions. Most of the time, they would cook at home and snack a bit outside. In Singapore, she was transformed into a poor person qiong ren due to the higher cost of living and SGD exchange rate. The only room she thought was value for money turned out to be next to an expressway. Eating out became a wasteful necessity for her. Yet, observing Singaporeans, she found to her surprise that even the working class here would eat out for almost every single meal. 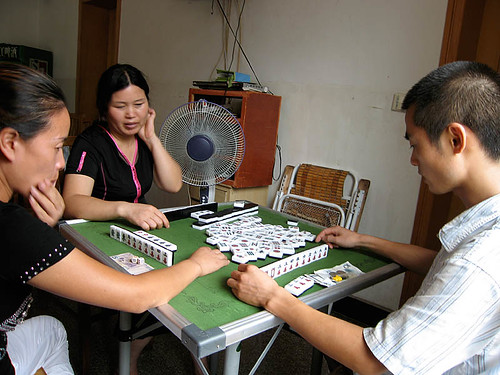 Another house rule which Shi found almost intolerable was the restriction on bringing friends home. She felt like she was imprisoned and attributed such inhumane restrictions to Singaporeans being Westernised. Of course, she also liked certain things about Singapore like the orderliness, the cleanliness and the sheer convenience of having stores and markets just beneath one’s flat.

Shi also touched on those study mamas who gave up because they could not adapt to life in Singapore. The entrance exam is not only for the child. The study mama also has an “entrance exam”. Shi is proud of herself for being able to endure the physical and mental challenges. But for some, Shi lamented that it’s not the child who couldn’t pass the entrance exam but the mother who lacked the life skills and endurance to survive in Singapore. Shi does not think highly of these women.

2003 was also the year of SARS. Shi’s endurance was tested to the limit. Interestingly, she made no mention that SARS originated in China. She only said that it occurred in Singapore and was a global issue. She mentioned that some of her compatriots were so scared of the outbreak in Singapore that they went back to China! She also mentioned in passing that we should just let the leaders do their jobs and not interfere as we are not experts. 听天由命 was all she could/should do. Fortunately, mother and son were not directly affected by the epidemic.

Going forward to the Covid-19 pandemic of 2020, many mainlanders insisted that there should be no mention of Wuhan. Trump only called it the “Chinese virus” after China’s top epidemiologist Dr Zhong Nanshan suggested that it could have originated from somewhere outside China and China’s foreign ministry quickly followed up with a brusque demand for an explanation, audaciously insinuating that America brought the virus into Wuhan through the Military World Games 2019 which happened to be held in Wuhan. Changing the narrative early gives muscle to the propaganda department. This distortion of history has been so potent that veteran RTHK host Sam Ng pointed out that some youngsters in China now believe that SARS stands for Special Administrative Region Sickness! Even the older people who lived through it accept the lie because it has been told too many times.

Back to the book, Shi met a study mama who was a “poet”. This “poet” would keep writing articles to Lianhe Zaobao, hoping that they would employ her as a journalist. Shi commented that though she was a very talented writer, she lacked what our newsPAPer wanted. Shi admitted that she had as much angst as this talented writer, but she kept it to herself as her priority was to get her son educated here and not get involved with socio-political discussions, even though the temptation is great as that is allowed in Singapore.

Shi’s son took the entrance exam but he was rejected by 4 schools they had applied to. The 5th school accepted him after an interview and Shi considered it a blessing in disguise as he could enroll in Primary 4 and not P3 in the other schools. She praised the school which interviewed her son before making the decision instead of looking at the results of the entrance exam alone.

Next, Shi thought of finding work. Money her husband sent from China was simply insufficient. Shi’s views and revelations on different work cultures between the two countries are quite interesting. To her, hours are terribly long in Singapore. She wrote that for most middle class jobs in China, people had time to trade stocks online, call up friends for a chat or even tend to vegetable plots on the rooftop! She described it as 祖国的仁慈和温暖。In Singapore, jobs that study mamas are allowed to do include flyer distribution, sales, beautician etc. She had worked as a beautician (emphasising that it’s a ladies only establishment) and sales promoter for a children’s educational package. She has also worked as a kindergarten teacher. It was her most fulfilling job, but she remarked that the pay was low and the school seemed to be squeezing every drop out of the teachers. Imagine that coming from a mainland Chinese. Our pre-school teachers must be paid very little even by China’s standards. Considering her health being the most important thing in ensuring her son’s healthy growth and development, she rejected the contract.

To immerse her son even more thoroughly and acquire independence, she let her son stay alternately with an Indian family and Taiwanese-run boarding house – an excellent arrangement that would put many multicultural Singaporeans to shame.

With her son away, Shi rented a flat with other Chinese women, some of whom were adult students who did not come with their parents. Horror of horrors, the agent played them out. The landlord had not agreed to the terms and evicted them. The agent, a permanent resident from her 亲爱的祖国, had cheated them. One of the victims was a student who had already paid one years’ rent in advance. She had no money to rent another place and returning home would mean that she had to face her creditors with no means to repay her debt. Are victims like her driven to the streets of Geylang? Shi did not avoid the sensitive issue of prostitution in her book. She simply expressed strong disapproval, not just with the women’s actions but also with the stereotype in the minds of narrow-minded Singaporeans.

As if to balance her view of dehumanised Singapore, Shi highlighted the overwhelming support from Singaporeans from all walks of life in the wake of Chinese student Huang Na’s murder. Study mama Huang Shuying received $120,000 in donations. Shi commended the generosity of Singaporeans. Of course, she did not mention that many Singaporeans also bought 4D for 1996, Huang Na’s year of birth.

Shi probably also didn’t have the benefit of hindsight to know that the $120,000 Huang Shuying received was turned into a “seed fund” for her new life in China which is apparently far more comfortable than the average Singaporean who had donated.

Shi believes that she could get used to Singapore, but she also confessed that she could never blend in. To her, 人情 or acts of maintaining cordial relationships precede everything. She could not understand why we can’t give presents to teachers and government officials who have helped us. She lamented that in Singapore, only rules and regulations count. She was also uncomfortable with Singaporeans’ arrogance and blindsided attitude. Adapting to life in Singapore meant 丧权辱国 – a phrase that made me sit up.

Madam Shi is obviously a lot more elegant and refined than most of her callous and uncouth countrymen that we encounter so often. In fact, she is probably more sophisticated than the majority of kiasu, kiasi and gian png Singaporeans. That notwithstanding, it’s obvious that she couldn’t wax lyrical about any “anomaly” in Singapore without judgement.

When we look at the issues that people from China have with our country, it is unfair to ask them to go back to China just because they have a different view. As long as they don’t try to change things over here (and some of them do), they have every right to work in a church without being Christians. While it’s important to hold the values we share close to our hearts, we should also not summarily dismiss comments and criticisms from people of different cultures. I agree with some of Madam Shi’s observations. Rules without exceptions turn us into cold, hard-nosed people. And we should also consider whether it’s financially prudent to eat out all the time.