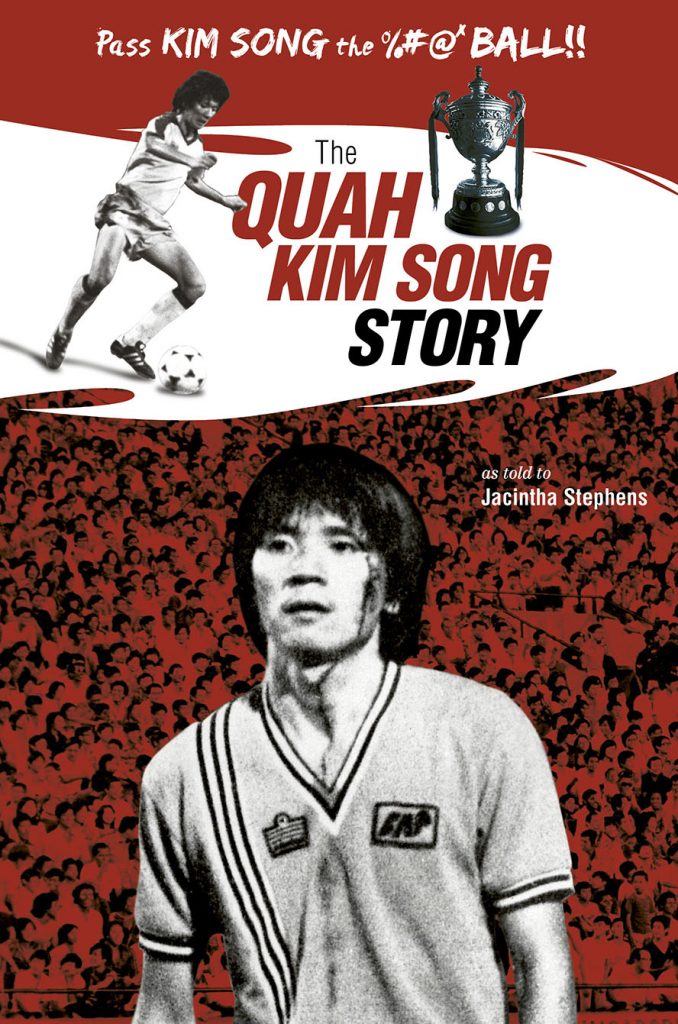 As you can see, the expletive is actually the subtitle of the book which opens with a rather dramatic and disturbing episode in Kota Bahru stadium, Kelantan. The Kelantan crowd was hostile and the opponents were bloodthirsty, attacking their legs and not kicking the ball, causing serious injuries. The referees turned a blind eye. The captain had to make a tough decision. They would let their opponents win the game. They eventually lost 8-0. The crowd was still furious. They had to be escorted out of the stadium by a riot squad! Only 17 then, Quah Kim Song found out the hard way that football is not just about the game or the sport.

His parents were never sports people, but Singapore’s football legend Quah Kim Song was at the right place at the right time. During the 1950s and early 1960s, his family lived in a beach bungalow in a Malay village near the British Naval Base in Sembawang. There was a big compund in front of the house where the boys could hone their football skills. Ships from the UK and elsewhere would dock at the base to be serviced and without much alternative entertainment, the sailors would form football teams with locals shipyard workers and play at the field at Deptford grounds. Also without much alternative entertainment, 2-3 thousand spectators would turn up to watch the games.

Many gifted local players emerged from the grounds of the Naval Base. Quah’s eldest brother Kim Thuan begun work at a young age to help support the family. He was never a footballer. Second brother Kim Beng, third brother Kim Choon, fourth brother Kim Swee, Kim Siak, Kim Lye were all introduced to the game, thanks to the conducive environment at the Naval Base. Apart from his eldest brother and his youngest brother Kim Tiong (who was a track and field athlete), every boy in the Quah family played football. Between 1951 to 1981, there was at least one Quah and at one time even four Quahs on the national team. Even his three sisters were in the national Women’s Football Team.

Quah believes that the high standards of British football rubbed off on the local players then and for the Quah brothers, that’s where their football careers took off. A football coach by the name of Choo Seng Quee was watching the games closely and diligently scouting for talent and grooming them even though he was not the national coach.

Although Quah spent a lot of his time playing football and even hockey, he did well in academically and graduated from Naval Base Secondary School to Raffles Institution in 1969 to do his Pre-U. That year, age 17, he was roped into the national team, joining brothers Kim Swee and Kim Lye. It was a challenge juggling his studies with football. After Pre-U, came his National Service and Quah was posted to Pulau Tekong for his BMT! It was a nightmare for Recruit Quah. Fortunately, he was “rescued” by football, having to play several games in Malaysia during that time. By the time he returned to the barracks, he was far behind his fellow enlistees. He was thus given a dormant posting which allowed him to play football and leave for important games at short notice.

Chapter 5 talks about Coach Choo or Uncle Choo as he was affectionately referred to. He was a successful businessman, dealing with sporting goods. After identifying Quah as a future star, he coached him for free. He even made boots for the players and didn’t chase for payment. In fact, he even helped players settle their bills so that they could concentrate on the game. Quah obviously had great admiration for Choo. He wrote: “You can’t find such a man anymore. One with so much knowledge, a genius for spotting talent, and a selfless commitment to developing each player to his fullest potential”. When his players made a mistake on the field and the spectators booed, he would turn at them and say : “Why are you booing at my players? It’s me that you should be booing – not them!”. However, unable to get along with people managing the Singapore Amateur Football Association, it was only in 1977 that Uncle Choo was finally appointed national coach. Quah should have felt elated, but Uncle Choo was unable to coach him because he had been suspended!

Back then, Quah was working as a journalist for the Straits Times. Team manager Yip approached him to play in a tournament in Korea. As Quah had work commitments, he stated the condition that he must be allowed to leave once the team was eliminated from the tournament. Yip readily gave him his verbal agreement. When the team lost to Malaysia, Quah started packing but the team manager insisted that he played another friendly game with the Koreans. He denied promising Quah anything. Perhaps a bit of the no-nonsense attitude from Uncle Choo rubbed off on him, Quah returned to Singapore on his own.

Quah was summoned by the FAS. Lee Bian Tian represented him pro bono and after many weeks of argument, Quah was found guilty of misconduct. He was sentenced to a 2-year suspension. Quah vented his frustration in his column in the Sunday Times and for that, he received a further 6-month suspension for making adverse comments against the FAS.

The 25-year-old Quah Kim Song was devastated and furious. He announced that he would give up on football and play golf instead. Fans in the stadiums held banners protesting the ban. Then, lawyer N Ganesan took over as chairman of FAS and he wanted Uncle Choo so badly that he was willing to stick his neck out and take all responsibility in case Choo created a scene. Uncle Choo was willing to accept the offer on a couple of conditions. First, he wanted Quah’s suspension to be lifted.

Only three months into his 2.5 years suspension, Quah was back. The entire FAS disciplinary team resigned. The national team was back on track. The game was soon taken to the National Stadium in Kallang, with a capacity of 55,000, generating the legendary Kallang Roar. Fans cheered the players on and gave them interesting nicknames.

“While we played our hearts out on the pitch, the entire country seemed to be following it on radio or TV. If we scored, loud cheering could be heard throughout the HDB heartlands and coffeeshops.”

It was the final of the Malaysian Cup against Penang in 1977. It was played in the Merdeka Stadium in KL. Uncle Choo warned the players not to be complacent. Within the first 10 minutes, Quah scored the first goal. But capitalising on a mistake made by Singapore’s team captain, the Malaysians first equalised and then went on to lead Singapore by one goal. 1-2. Uncle Choo did the unthinkable at half time, he took the team captain out and passed the leadership to Dollah Kassim. Then, the Singapore team equalised at the 71st minute and went into extra time. The mood was tense, but Uncle Choo was confident as he claimed he had trained his players for a 3-hour game. The Singapore fans went crazy. The final goal came from a ball passed by Dollah and headed in by Quah. Singapore won 3-2. After 12 years, Singapore finally won the Malaysian Cup! Cheers literally reverberated throughout the heartlands. It was an exhilarating experience for the players to be greeted by fans at the hotel where they were staying. Thousands of fans greeted them at Paya Lebar Airport when they arrived home.

The players were invited to the Istana. Then Prime Minister Lee Kuan Yew shook hands with all the players except for Dollah Kassim and Quah Kim Song. Yes, it must have been their long hair. Mr Lee was so anti-hippie that he required foreign male artists which wished to perform in Singapore to cut their hair short before entering the country. Luckily for Quah and Dollah, he only refused to shake their hands.

After the Malaysian Cup win, the team went on to beat Thailand 2-0 and Malaysia 1-0 in the Pre-World Cup qualifier. They were stopped by the Hong Kong team. What happened after the Malaysian Cup? Diabetic Uncle Choo’s leg which he had neglected turned gangrenous and had to be amputated. After that, he was replaced, deemed unsuitable for the job and could only watch his players from his wheelchair. Then, another unthinkable thing happened. Uncle Choo had an offer from the Johor Football Association. He coached the Johor team which the Singapore team found hard to beat. Quah went for a short stint in Hong Kong but he didn’t like it there. The absence of his favourite foods and the gambling culture made him uncomfortable. I find this the most appropriate time to jump back to Chapter 7.

“Shirley, this is Kim Song.”
“Kim Song who?” asked Shirley, a bank officer with OCBC then.
“I’m the footballer.”
“Uh-so?”
“Your sister told me to give you a lift back because her car is out of order.”

That’s how it started. Quah Kim Song’s first date. Chapter 7 touches on Quah’s love life and just weeks before his wedding, Quah broke his leg in a match. He managed to go ahead with the wedding but full recovery took 6 months. Not being a full-time footballer, Quah was inundated with job offers. He had worked for The Singapore Monitor, CK Tang and F&N. The Quahs had a son and a daughter. Leon Quah would play his father in the movie Kallang Roar. Sadly, Shirley passed away in 2007 after a battle with cancer.

The final Chapter tells us about how Quah Kim Song said goodbye to football. At age 28, Quah played against a Russian team and scored a 2-1 victory for his team. But Quah knew that he was never the same man after his injury. At age 30, he decided that he had to do what’s best for his family. He left the national squad. He had trouble letting go. Shirley kept distracting him. But Quah had never really given up completely on football. In 2009, he was at a friendly match between former national players from Singapore and Malaysia where 60-year-old Dollah Kassim played his last game. At 62, Quah was still representing the Singapore Recreation Club, always playing cautiously.

It has been many years since the Singapore team brought home the Malaysian Cup. People still recognise Quah Kim Song on the streets. He readily admitted that the rewards comes from millions of fans and the ability to excite and entertain them. If there’s any advice that Quah could give to young players today, it would be the same as what Uncle Choo gave him. There are too many distractions in the modern world. You need to make huge sacrifices for football. 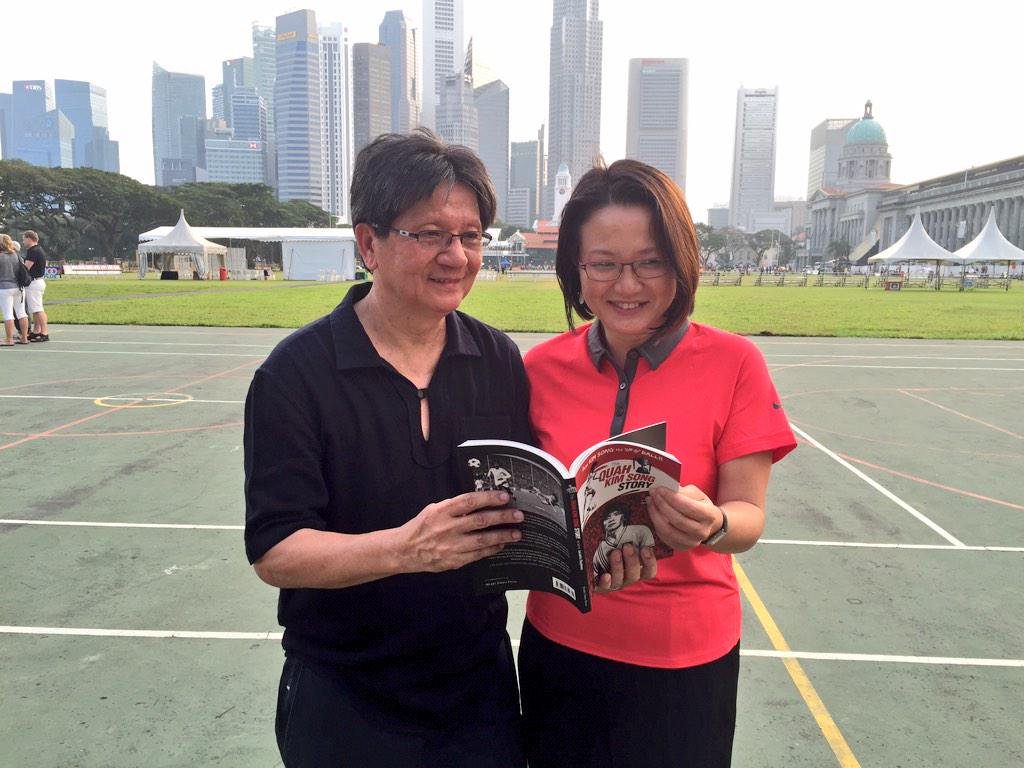