Q: Between tea and coffee, which would you choose?

Chua Lam: Tea. I’m very faithful towards my drinks. I don’t want to spend too much effort studying coffee.

Q. There are so many kinds of teas out there. Tie Guanyin, Longjing tea, Jasmine tea and Ceylon tea. Why puer tea?

CL: Longjin is a kind of green tea. Too much of it will hurt your stomach. Tie Guanyin is a partially fermented tea. The aroma is very strong and only good when taken in small sips. Puer is a fully fermented tea. It gets better with age and the aroma is not overwhelming even when you make it really concentrated.

I’m in the habit of having tea the first thing in the morning. I also have tea before I go to bed. It’s important that I tea I drink doesn’t cause stomach upset. Some teas are high in caffeine and disturb my sleep. But puer has never given me any problems. I can make it as concentrated as ink and I’m still OK with it. I often joke that I don’t have enough ink in my stomach.

CL: The Cantonese are the smartest tea drinkers. Puer tea originates from Yunnan Province. In the whole of China, only the Cantonese people appreciate it. Research has shown that puer is able to rid the body of excess fats. If you’ve overeaten, a cup of puer tea brings great comfort.

Q: So why do you sell something called “bao bao” tea?

CL: It’s a long story. You see, being fully fermented, there is a somewhat mouldy taste to puer. It’s not everyone’s cup of tea. I found out that by adding rose petals, that mouldy taste can be covered up. Then, I consulted Ming Dynasty concoctions for hangover and indigestion. By blending these ingredients, I produced a tea for people who frequently indulge in rich food and liquor. Initially, this tea was meant for personal consumption. Then, Jackie Chan came to my office. He had some and found it good. Word got around and everyone wanted some. 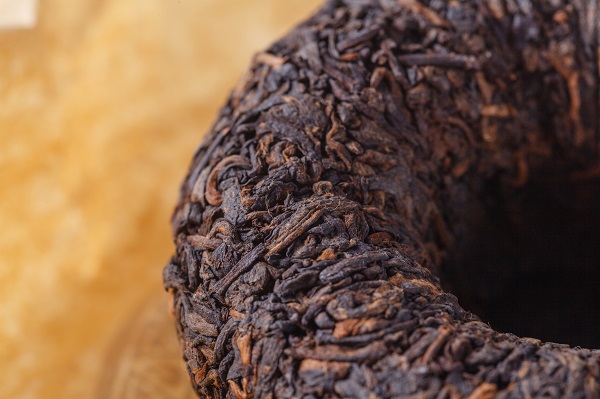 Q: Since when did you start producing it commercially? How did the idea of selling tea come to mind?

CL: It was at a book fair that the idea came to me. I felt that autographing books was too commonplace, so I decided to make “bao bao” tea to show my appreciation to my readers. The organisers said that demand was too strong and asked me if I would like to sell it. I agreed, provided that the proceeds went to charity. We sold the tea at HK2 per cup. On that event, we collected HK800. A bell rang in my head and I decided to make “bao bao” tea into a commercial producct.

Q: Don’t you think the name sounds a bit crude?

CL: It’s good for a start because it’s so “loud”. But you’re right. I’ll change it. Maybe to another “bao”. I like to hug people.

Q: Why are you drinking tea made from Lipton teabags now?

CL: Haha… it’s a habit I picked up in Europe. Except for the British, all other Europeans prefer coffee to tea. You won’t find much good tea around. Carrying puer around with me when travelling and doing outdoor shoots was a major hassle, so I decided to buy some teabags, add hot water and treated it like Chinese tea. While working in Japan, I didn’t like Japanese teas as they were not strong enough. I normally place 2 Lipton teabags in a cup of hot water when I want tea on the move in the afternoon. Only in the morning and evening when I have more time will I enjoy my puer.

Q: You are Teochew. Why do you not like gongfu tea?

CL: I do drink it. It’s just that I don’t have the “gongfu”. If others have made it and offer it to me, I’ll drink. I like to have my tea in a larger Chinese teacup. At home, I have many different teacups for every season. In autumn, I would use a teacup with brown leaves glazed on it.

Q. When did you start drinking tea?

CL: Since young. My father had a good friend, Uncle Tong Dao. Whenever we visited him, he would serve the finest Tie Guanyin. Uncle Tong Dao was delighted that a little devil like me could actually appreciate strong and bitter tea. He liked me very much and taught me a lot about Tie Guanyin.

Q. What about your father? Does he like tea?

CL: Of course he did. He was especially fond of tea. Living in Singapore, we didn’t have any great sources of good water, so he made us each carry a porcelain cup to collect dew from flowers in the garden. The fire used for boiling the water was actually fuelled by olive seeds. He said that only the fire from olive seed charcoal would be powerful enough to make good tea.

Q: Do you drink longjing tea or Jasmine tea?

CL: I do drink longjing tea. Good longjing tea is hard to come by, but it can get you addicted. I don’t drink Jasmine tea. Only Northerners appreciate it. Too much flowers added. It’s not tea anymore.

CL: Yes. My favourite is a kind of Japanese tea called “yulu”. The trick is not to use water that is too hot. You pipe hot water into a large teacup called a oyusame. Then, you let it cool down a bit before you add the tea leaves. Let it steep for 2-3 minutes, then you’ll have a strong, aromatic, tasty brew – almost like a soup.

Q: What about Taiwanese tea?

CL: I don’t like Taiwanese tea. They are so contrived. Besides, their premium teas are so expensive. Defeats the whole purpose of drinking tea as a daily ritual.

Q: What’s the most expensive tea you’ve had?

CL: Great Red Robe (大红袍). I got to know a bunch of Fujian tea lovers. They don’t scrimp on their tea-drinking hobby. At an auction, the tea went for HK160,000 for just 200 grams.

CL: It was really good. But on my own, I would never be able to afford it. The tea leaves I buy at Kowloon are all mid range stuff. For instance, Puer costs about HK300 per kati. It lasts me a month. HK10 a day. That’s not too lavish. If you’re pampered with tea in the top range, you’d never be able to sit down and have tea while you’re out with friends. That takes away a lot of life’s simple pleasures.

Tea is something that belongs to the common people. I’m a commoner. This is one thing I’d never forget.